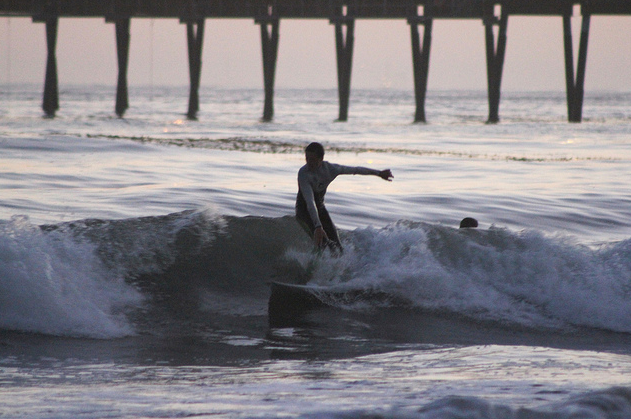 Haskell’s is a mediocre beach break located near the Bacara resort on the north end of Goleta.  The waves don’t ever really get that
good here, but it’s a good place to check in the summer during a wind swell.  Expect weak waves, it’s best to bring a fun board or fish.  If you’re feeling adventurous and there are no waves to surf, try sneaking into the Bacara swimming pool and enjoy your day lounging with the resort’s wealthy guests.

The Beach is named after Mike Haskell, who was the keeper of the key to the private beach at Tecolote Canyon Ranch.  Local surfers would need Mike’s permission to surf the Ranch’s private beaches, and so the spots became known as Haskell’s.

To get to Haskell’s Beach, exit the 101 North at Winchester Canyon Road, merge on to Calle Real, make a left on to Cathedral Oaks and cross the Freeway.  Then turn right on to Hollister and head towards the Bacara.  Park in the tennis court facility for the Bacara and follow the paths to the beaches.  See Map