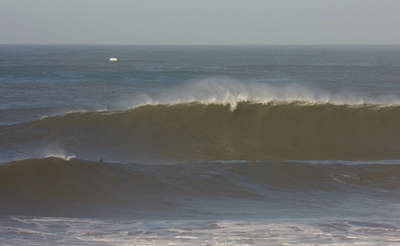 Sands Beach is probably the most popular break in the Goleta area because of it’s consistency and proximity to the student slum known as Isla Vista. With the right tide and swell direction, Sands can actually get quite good. But then again, if Sands is really good, then nearby point breaks are probably producing better waves with the same swell.

Sands is usually best in the winter and spring and can picks up a lot of wind swell.  The kelp on the outside will keep the lineup fairly glassy, even in a heavy winds.

Surfing at Sands can be very annoying for a few reasons. There are hazardous boulders spread throughout the lineup, the kelp is thick and hard to paddle through, pungent methane gas boils up from the earth below and produces a fart-like smell that lingers in the surf zone, and finally, tons of UCSB students pack the lineup. Generally, when a UCSB freshman moves to Isla Vista from some faraway land nowhere near the coast, the first place they learn to surf is at Sands.

Regardless of the hazards, bad odor and student surfers, Sands does have its days. The best sands bars are in front of the Devereux Slough, a few hundred yards down the beach from the gated entrance at Coal Oil Point. If there are no waves, enjoy the beach scene packed with UCSB students.

The best time to surf Sands is on a medium tide.  The waves tend to get dumpy and drained out during a low tide, and you’ll probably catch a fin on the kelp or a rock.  At high tide, the waves tend to crumble and break right over the rocks along the shoreline.

Isla Vista is a party town, which means you can find empty waves early in the morning while everyone else is nursing their hangover.

Access to Sands Beach: Park on the corner of Camino Majorca and Del Playa, then follow the walking path west until you come to Coal Oil Point.

[facebook_like_button]
Best Tide: Medium – High.  Low tide is too drained out and hazardous because of submerged rocks.