When an artist’s debut single drops to great acclaim, that usually means that their debut album will follow shortly so as to capitalize on their newfound fame — such is the case with folks like Lorde with “Royals,” Azealia Banks (or, a major label tried) with “212,” CHVRCHES with “Lies.” But SOHN’s “The Wheel,” a clattering, looping earworm, came out on its titular EP in 2012, and debut album “Tremors” came out only this past April.

On first listen, Christopher Taylor’s music, sang by him with a sonorous Brit accent and backed by moody electronic production, sounds like a less surface-level morose James Blake. But the differences shrink the more you listen in — Blake fades in and out of silence with wobbly dub drops, while SOHN’s music spins in tightly-wound repetitions. The biggest difference comes in their live show, and SOHN more than proved his own singular artistic vision at show this past Friday night at Los Angeles’s El Rey Theatre.

Opening for SOHN on this run of his album tour is Wet, a three-piece bedroom pop duo from Brooklyn. Composed of members Joe Valle, Marty Sulkow and vocalist Kelly Zutrou, Wet’s formal oeuvre thus far is a self-titled EP. Songs like “You’re The Best” and “Don’t Wanna Be Your Girl” take a dreamy pop sound far from saccharine territory: the lyrics are both self-aware and self-effacing, such as when Zutrou feigned a flat intonation while spouting verbal slight-of-hands like “I think we better quit while we’re ahead” or wrung emotion out of a soaring higher register singing “My baby, he said he loved me, but that’s a lie; no more lies.” 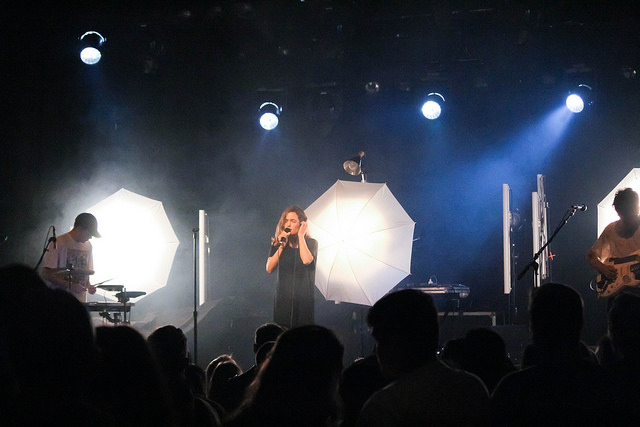 Though their catalog is still quite small, the band was well-received by the tightly-packed venue crowd despite this being their first LA gig; it should only be a matter of time before they headline their own run of shows.

While the applause was enthusiastic for Wet, it was nothing compared to the roar of the crowd when Taylor and his crew took the stage. Flanked by long tube lights and sporting a hood that shrouded his face for most of his set, SOHN set in motion the precise clockwork of his live performance. 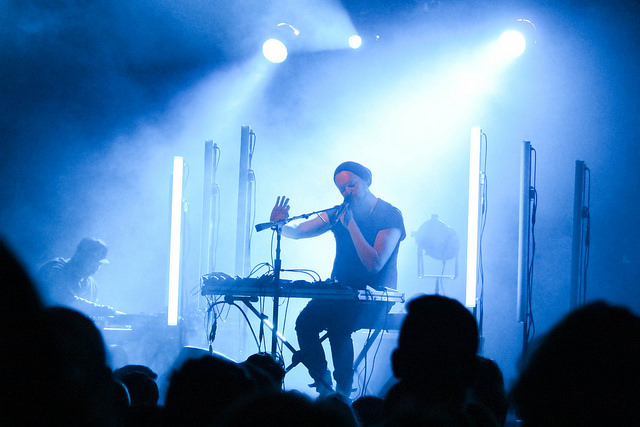 Compared to the recorded album, the live “Tremors” LP is bursting with many more intricate layers of sound, starting with the live fullness (and uncanny pitch accuracy) of Taylor’s voice. Songs like “The Chase,” which aren’t necessarily high energy, are imbued with urgency from the stage, while already bumping tunes like “Artifice,” combined with the strobe-assisted lights show, become club-ready jams.

Yet the running thread between all of SOHN’s songs — a sense of sadness so deeply a part of the music that no amount of chirpy handclaps can dispel, such as when Taylor lyrically sighs, “If you’re thinking of letting me go then it’s time that you do.” That’s not to say that the music is depressing; it’s merely centered around a particular kind of resigned feeling, one that Taylor easily shrugged off between songs in order to shyly chat up the audience. And while SOHN’s music invokes its creator’s bluest sentiments, the man who’s waited years to unveil his carefully-crafted art has plenty to be happy about.