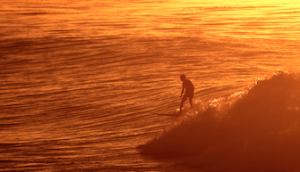 Devereux, officially named Coal Oil Point, is the point break just to the east of Sands Beach. If Santa Barbara is being hit with a big west swell, you’re better off paddling out at Devereux (or Campus Point on the other side of IV) rather than trying to surf the beach break at Sands.

Devereux is not really an amazing wave, in fact it’s my least favorite Santa Barbara point break. Devereux is extremely mushy and tends to suffer from morning sickness; it always seems to be warbley. And like “Sands” to the west, Devereux is always packed with UCSB students, most of whom are just learning to surf.

That said, there are some good days at Devereux.  When the sand is built-up just right, medium-sized west swell hits the rock shelf directly off of point and creates a steep wave that races for 50 – 75 feet before it mushes out.

Hazards: There are a few large boulders right below the water, but they don’t tend to break the surface like the boulders at Sands do. Lots of kelp for your leash to get tangled in and your fins to catch while on a wave.

Trivia: Because of it’s high density, low income, lack of city services and high crime, Isla Vista is considered a “ghetto” and is sometimes called “the-Ghetto-by-the-sea.”