Beyond the 5-star resorts, thumping discotheques and million dollar villas, the true spirit of Bali endures. Cleaner beaches and whiter sand can be found in Thailand or the Philippines, and more affordable prices in Cambodia. The reason travelers return again and again is for the culture and the people.

Balinese cultural is steeped in tradition, myth, spirituality and even black magic. Ancient customs persist, from the daily offerings of incense and rice for the gods, to dances and ceremonies.

One such tradition is the tajen— a cockfight.

Religious texts indicate that tabuh rah (literally spilling blood) has occurred since at least the 10th century as a sacrifice to appease evil spirits. In fact, no religious ceremony in a temple may commence until the blood of at least three sabung (roosters) has been spilled on the ground.

Cockfighting is also a form of entertainment, gambling and camaraderie which draws villages together. This was the type of cockfight my two friends and I arranged to visit through a local Balinese man named Ketut.

The Legality of Cockfights in Bali

Following WWII, the Hindu island of Bali was swept up in Indonesian nationalism and became part of the world’s most populous Muslim country. Gambling is a sin in Islam, and the central government outlawed cockfights to deter Balinese peasants from engaging in “satanic” activities. Although some cockfights are allowed for Hindu ceremonies, it is generally spurned by the Indonesian public.

Accordingly, cockfights are spontaneously organized and hidden away on back roads, out of sight of the authorities and tourists. If the illicit fight we were attending were to be raided by the police, my friends and I could of had our visas revoked, been fined several thousand rupiahs, or worse, thrown in an Indonesian jail.

With the help of Ketut, I was able to coordinate a visit to a tajen one afternoon. My friends and I were the only Westerners in attendance, thankfully Ketut was able to act as our guide and assimilate us into the crowd.

Ketut picked us up from our homestay around 4:00 pm in his blue Kia sedan, and drove 15 minutes inland away from the beach, following winding jalans (roads) and gangs (alleys) until we arrived in a glade nestled between jungle on three sides, and a housing complex on the fourth.

The smell of the field was something i’ll never forget. Sweet smoke wafted from a charcoal pit were women roasted corn and meat skewers. The fetor of blood and  decaying carcass lingered around a pile of four dead roosters. Men sucked down their favorite Sampoerna cigarettes and exhaled the smoke with no regard to others standing nearby. To top it all off, it was 83° at 95% humidity, and not many people Indonesians wear deodorant, if any at all.

The scene reminded me of a 1950s teenage hotrod drag race, like something out of Grease meets the moon tower party from Dazed and Confused. Motorbikes are lined up, testosterone levels are high and the who’s who of the local villages show up with their best fighters.

It’s important to understand that the double entendre for “cock” is not a coincidence here. A man’s sabung–fighting rooster–is an extension of his virility and masculinity. Yes, size does matter, the biggest roosters with the most ornate plumage tend to be the best fighters, and command the most respect. And in Balinese culture, honor and reputation are paramount. 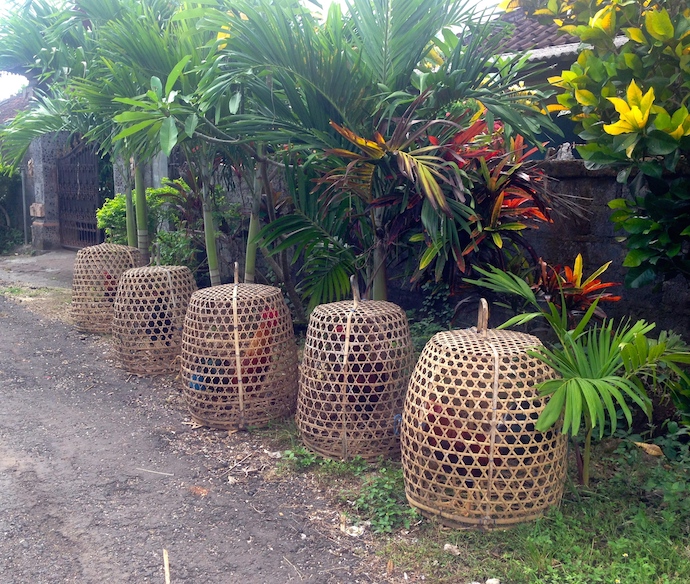 When visiting Bali, you’ll certainly notice roosters in their wicker baskets lining village roads. Nearby, men escaping the heat of the day by squatting in the elevated, thatched-roof platforms that line the roads. They almost always have their prized rooster in hand.

The sabung are stroked, massaged, combed, bathed in a pool of herbs and lukewarm water. Their owners pick dirt or bugs from the feathers, and hand feed them the finest kernels of corn, one-by-one. Just as a mother would carry and rock her baby in her arms, so do Balinese men with their roosters. 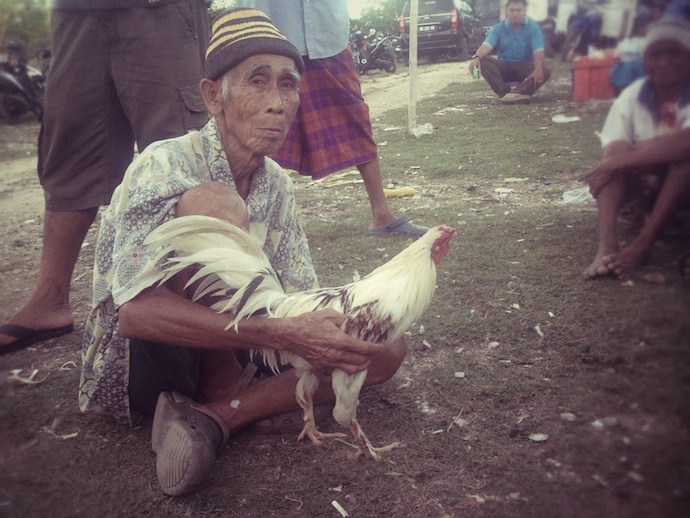 Leading up to a fight, the roosters are injected with a concoction of pain-relieving drugs and strength-inducing steroids. In bigger fights, Ketut explained to me, chili peppers are inserted into the anus or down the throat to rouse the rooster and give it a spark.

A crude circle of men, 15 – 20 feet in diameter, is formed around a box outlined in chalk in the dirt. This is where the roosters do battle.

Men that think their sabung is champion enter the ring and and crowd picks a worthy opponent by shouting to the other men that brought their sabung.

The two sabung are sized up, and a metal spur, taji, about the same size and shape as the blade from a Swiss Army Knife, is tied to the one of the legs. The taji can only be sharpened during a new moon, lucky tanjis are sharpened during a lunar eclipse. 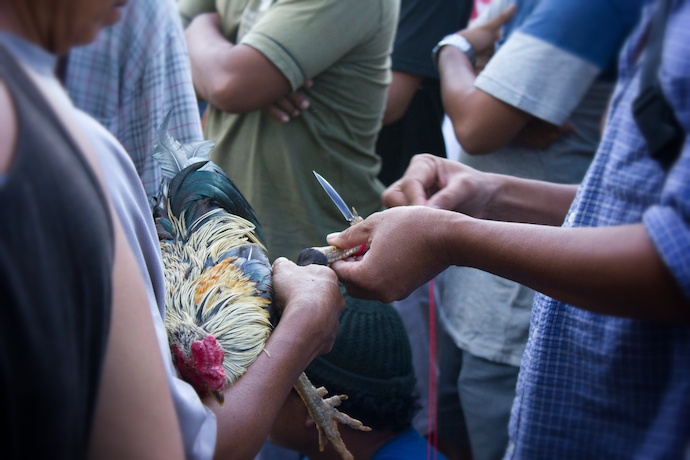 While the taji is being fastened, men make bets with the roosters owner, and side bets are made as well. Odds are agreed upon by yelling back and forth with the other gamblers.

To start the fight, a piece of a coconut, resembling a bowl shape, with a hole on the bottom, is floated in a vessel of water. It takes about 30 seconds for water to rush through the hole, eventually sinking the coconut, which marks the end of a round.

The roosters are set on each other, and the fight ends when one kills the other, or when one refuses to fight any further.

In between 30 second rounds, the roosters are revived and tended to by their owners, like cornermen in a boxing match. 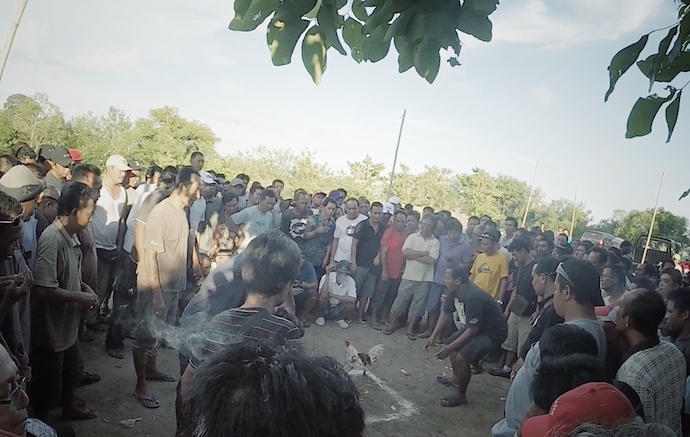 Cockfights, of course, are brutal and some might find them unsettling. It should be noted that these roosters live extraordinary lives up until the fight. They’re cared for like a human child, and roam free in their owners homes, unlike the chickens held in tiny cages in factory farms in the West.

As discussed, cockfighting is a tradition dating back at least 1,000 years in Bali, and the Balinese have the utmost respect for their sabung. Roosters that are killed are brought back home and eaten, nothing is wasted. 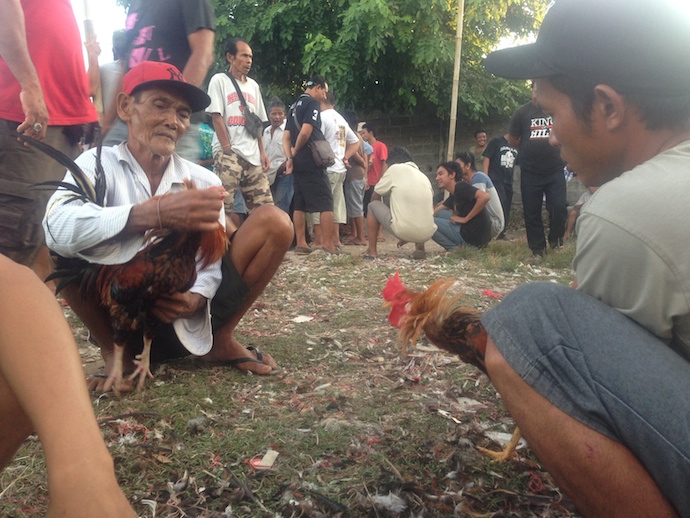 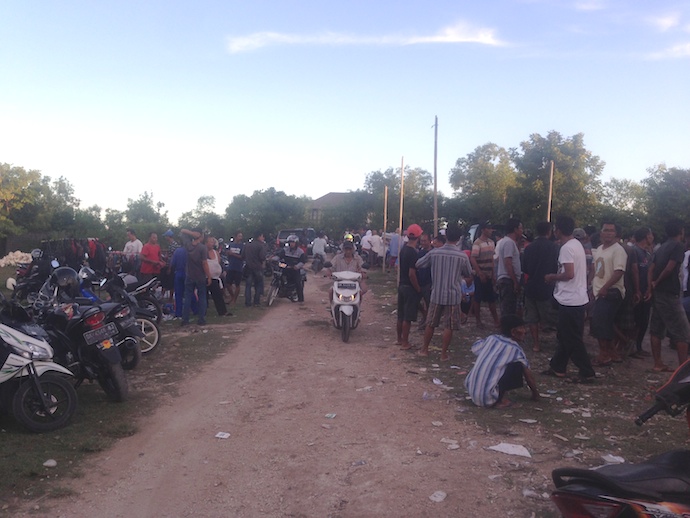 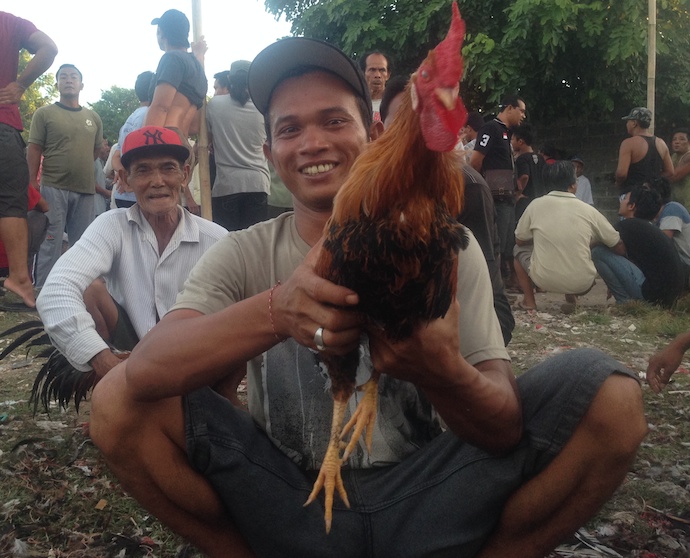 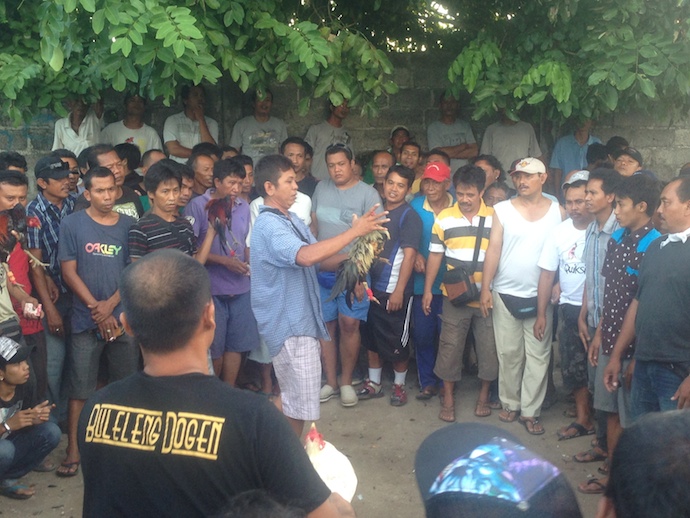 Below is a video of raw clips I put together. Warning: the video is a bit graphic