Coachella pool parties and after-parties are just another reason to make it out to Indio every April. Even if you couldn’t get a wristband for the Coachella music festival, there is still plenty of fun to be had at out in the desert.

In fact, many Los Angelenos vacation in Palm Springs, Palm Desert, Rancho Mirage and La Quinta during the week of the music festival just to attend the parties.  And most of the after-parties and pool parties present live music and hand out free goodies, making it feel somewhat like the music festival (well, not really).

Here is a list of Coachella parties for 2013:
[see map of all party locations]

Who: Anyone that gets a ticket. THIS WILL SELL OUT
What: The mother-load of all Coachella after parties (it goes until 8:00am the next morning). There are going to be stories about this party for years to come. They also have a second weekend event! Lineup includes Slice n Dice, Kicks n Licks, Bais Haus, Bones and Troy Kurtz. See image above for full lineup.
When: Saturday April 13th. 10:00pm – 8:00am PREPARE FOR A LONG NIGHT
Where: Private Ranch in Thermal, 54950 Tyler St, Thermal, California 92774 [see map] 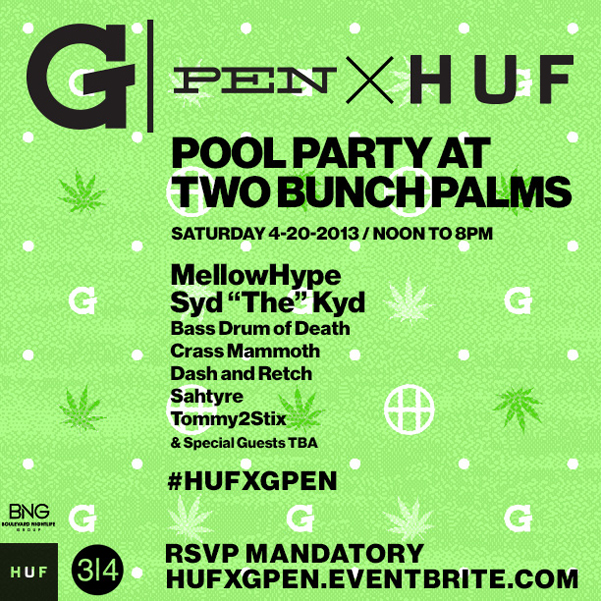 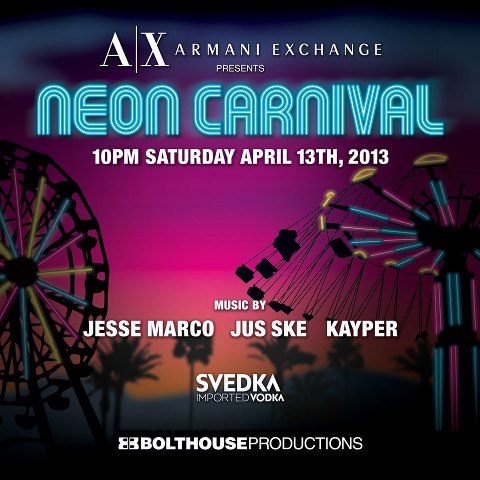 Who: People on the guest list, celebrities and wannabe celebrities. There are no details on how to get on to the list. Although I’ve heard you can just show up and wait in line.
What: The Neon Carnival is exactly what it sounds like… giant slides, bumper cars, carnival games and a neon ferris wheel. Only replace the kids and carnies with LA scenesters.
When: Saturday April 13, 2013.
Where: Tradition Aviation. 86400 Lightning St, Thermal, CA [see map]. (About 15 minutes from Coachella).

Who: Anyone on the guest list, you’ll just need to RSVP.
What: Full bar, product giveaways, food and performances from Penguin Prison, St. Lucia and several DJs.
When: Thursday April 11th and Thursday April 18th. 9:00pm – 1:00am.
Where: TBA. Last year it was at the Corona Yacht Club: 46600 Tyler St Coachella, CA 92236 [see map]. (About 20 minutes from Coachella). 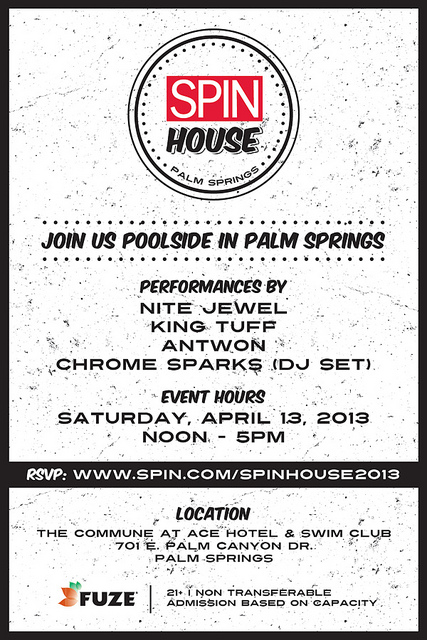 Who: People on the list.
What: SPIN presents SPIN House—a day-long pool party filled with drinks, ping pong and performances by ANTWON, King Tuff, Nite Jewel and Chrome Sparks. Be sure to hashtag photos #SPINHouse to be printed on-site.  Admission based on capacity, 21+. RSVP here.
When: Saturday April 13th, Noon to 5:00pm
Where: The Commune At Ace Hotel & Swim Club (701 E Palm Canyon Dr) [see map] 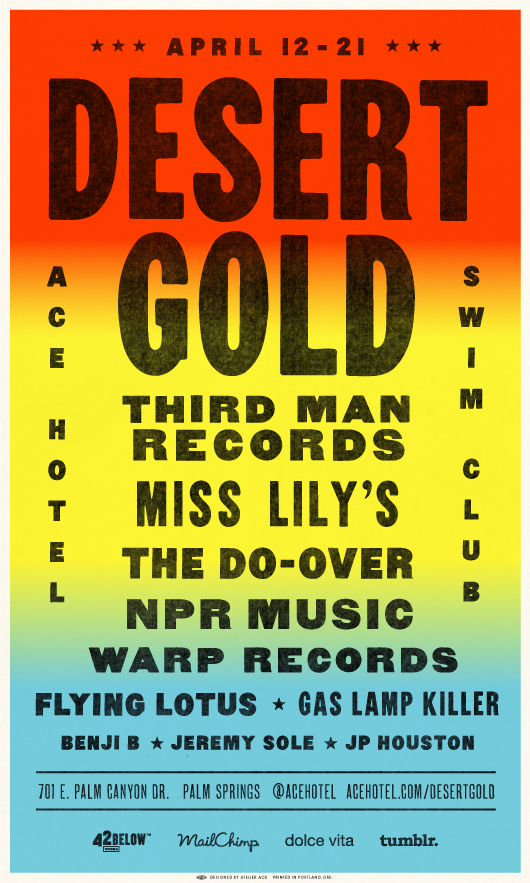 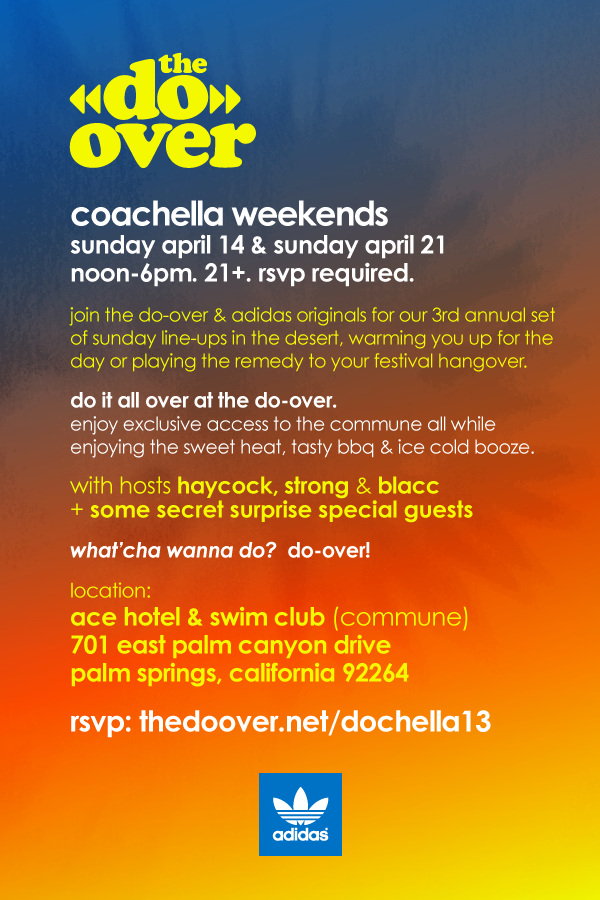 Who: Guests of the ACE Hotel in Palm Springs and friends. The pool party is free, open to the public and all ages. The nighttime events are free but are 21+ only.
What: Pool parties, night parties, Jamaican food, DJs, KCRW and Flying Lotus. All sorts of debauchery. FlyLo plays Thursday night before Coachella (April 11) from 10:00pm to 2:00am. That enough should be a reason to get over to the ACE Hotel!
When: All of Coachella week, April 11th – 21st. 10 days of parties.
Where: ACE Hotel, 701 E Palm Canyon Dr, Palm Springs, CA 92264 [see map] (45 minutes from Coachella) 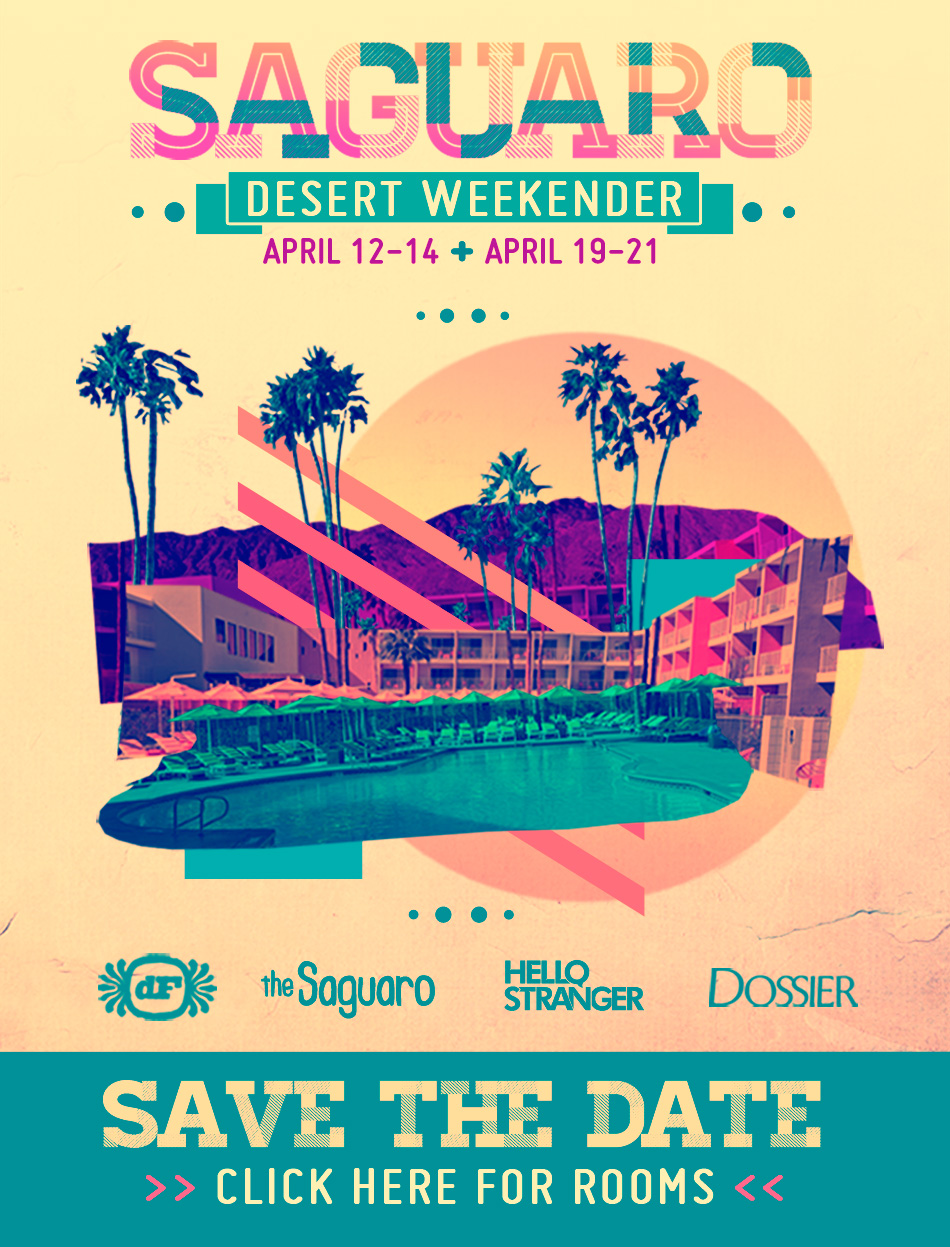 Who: Saguaro Hotel guests + Friends.
What: Forever 21 and Revolve Clothing are putting on this event. Not many details available, but updated will be made available here.
When: April 12th
Where: The Saguaro Hotel, 1800 E Palm Canyon Drive, Palm Springs, CA [see map] (45 minutes from Coachella) 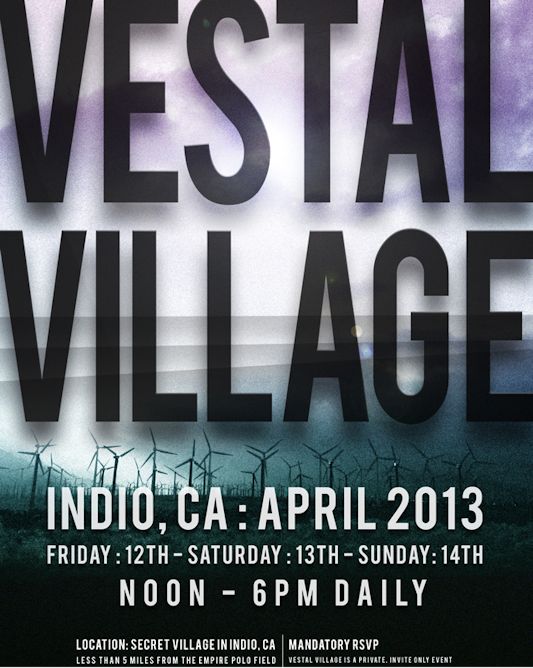 Who: People in the surfing retail industry + those who know someone that works for Vestal.
What: Setup by Vestal Watches, it’s a village of tents and RVs that exists for 3 days out of the year. The big hit last year was the slip-and-slide with a launch ramp into a pool.  LA Riots will be performing this year!
When: April 12th – 14th
Where: In the middle of nowhere, next to a horse farm. [see map] 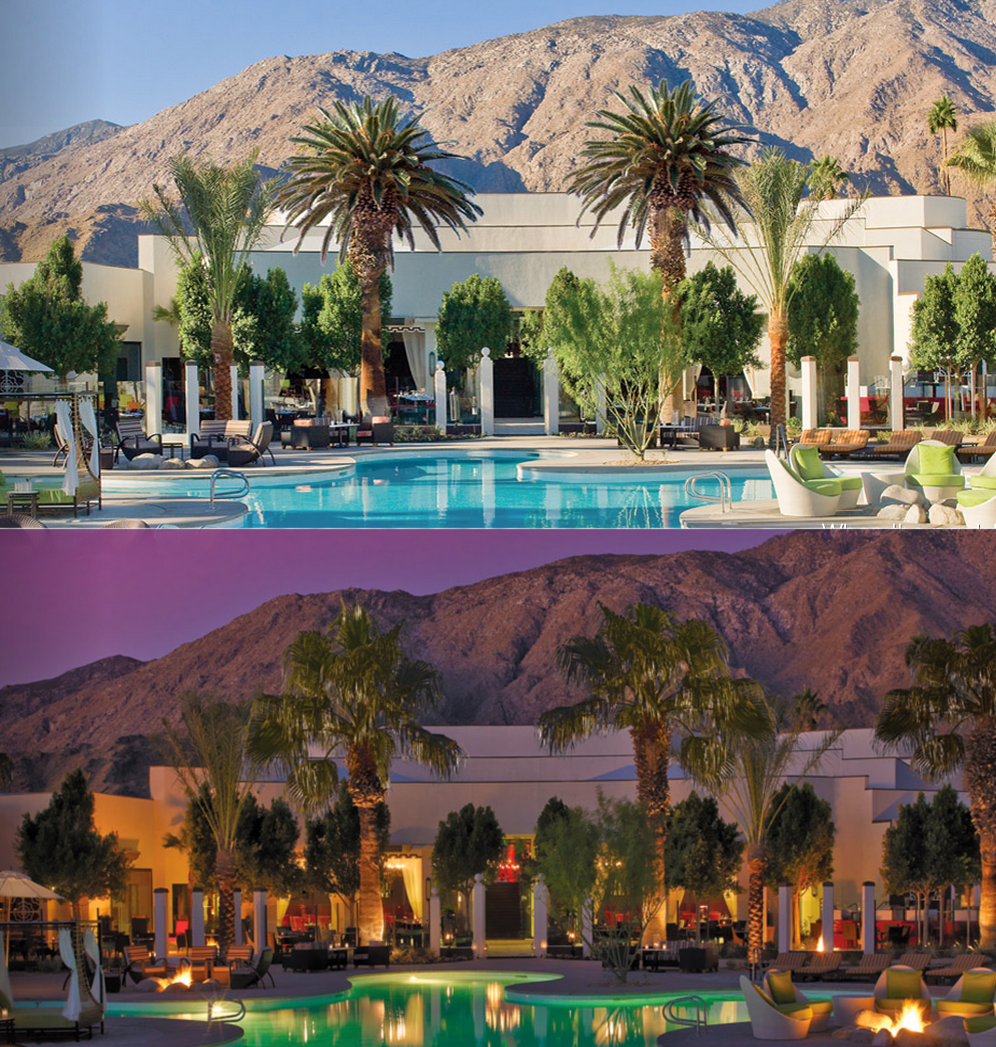 Who: Riveria Hotel guests. A 3-night stay is required for access, but that hasn’t stopped people in the past for rolling up and pretending they stay there.
What: The Riveria’s “Beauty & the Beat” is back. What is it? A pool party complete with a beer garden and a spa for instant mini-massages.
When: April 12th – 14th, and 19th-21st.
Where: Riveria Palm Springs, 1600 N Indian Canyon Dr, Palm Springs, CA 92262 [see map of all party locations] 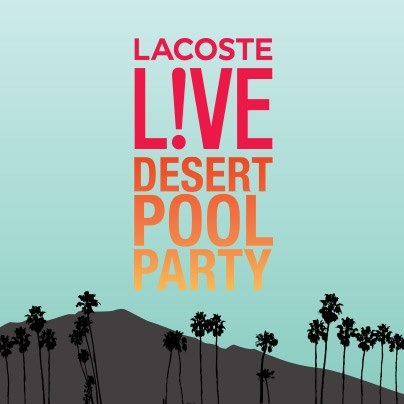 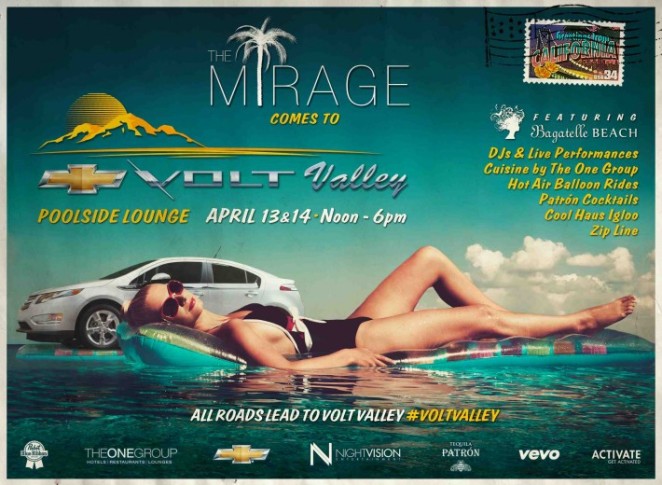 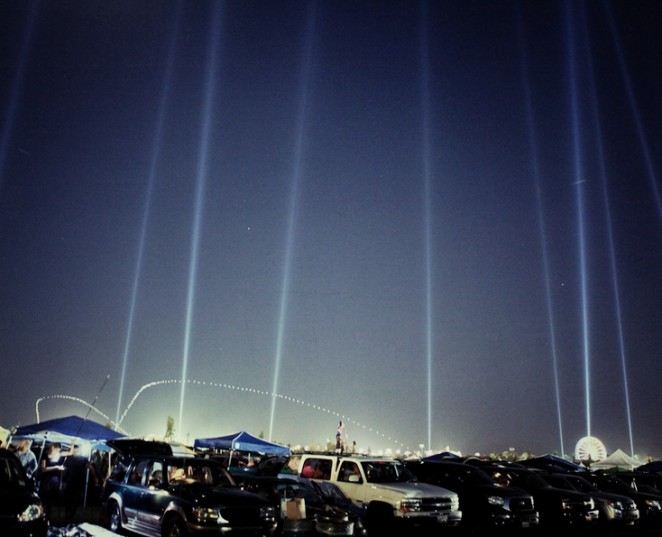 Who: All of the campers at Coachella and people with a Coachella wristband.
What: Drinking + drugs + debauchery. Dodgeball, silent discos, roller rinks, movies, beer pong, corn hole etc. etc.
When: All weekend
Where: Empire Polo Fields – Camping Area [see map] 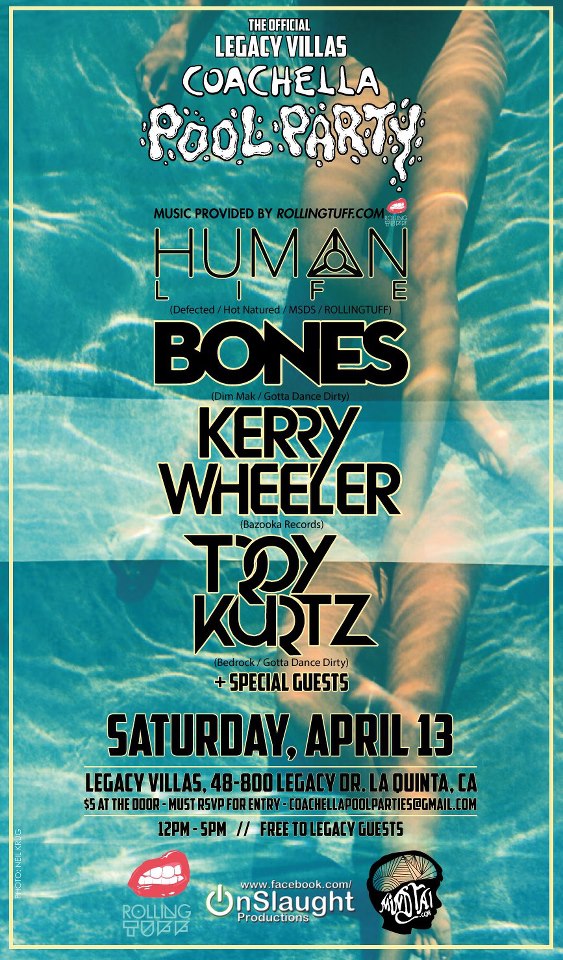 Who: Legacy Villas guests and those who pay the $5 entrance free.
What: The crew at RollingTuff.com are bringing you one awesome pool party.  Judging by the DJs on the bill, if there’s one pool party to attend this Coachella weekend, it’s this one.  Not to mention it’s just minutes from the Polo Fields. Must RSVP – coachellapoolparties@gmail.com
When: Saturday, April 13th.
Where: Legacy Villas,  48613 Classic Dr La Quinta, CA 92253. [see map] (Only 10 minutes from Coachella)

THIS EVENT HAS BEEN CANCELLED.  A MESSAGE FROM ROLLINGTUFF.COM:

**For reasons beyond our control, our Party at the Legacy Villa Pools will be canceled.**

The real reason is because the Legacy Villas Freaked out after they saw how many people were attending and made the event no longer open to the public. Renters, homeowners and guests of homeowners only. We would apologize to all of our fans for trying to make it out but it’s not our fault and you should all get an apology from the Legacy Villas.

We could have still thrown the party but we don’t like people telling us how to throw our own parties, we throw our parties the way we want to. So we unfortunately would rather pull out than throw a half ass party where its not open to the public. Sorry to all of the guest who we were excited to party along with us but ROLLINGTUFF doesn’t throw half ass parties. 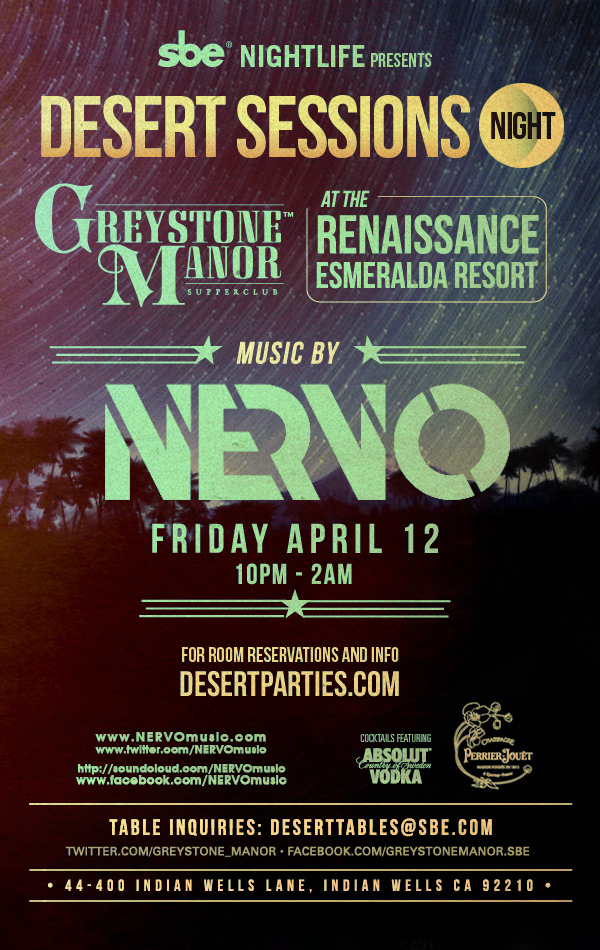 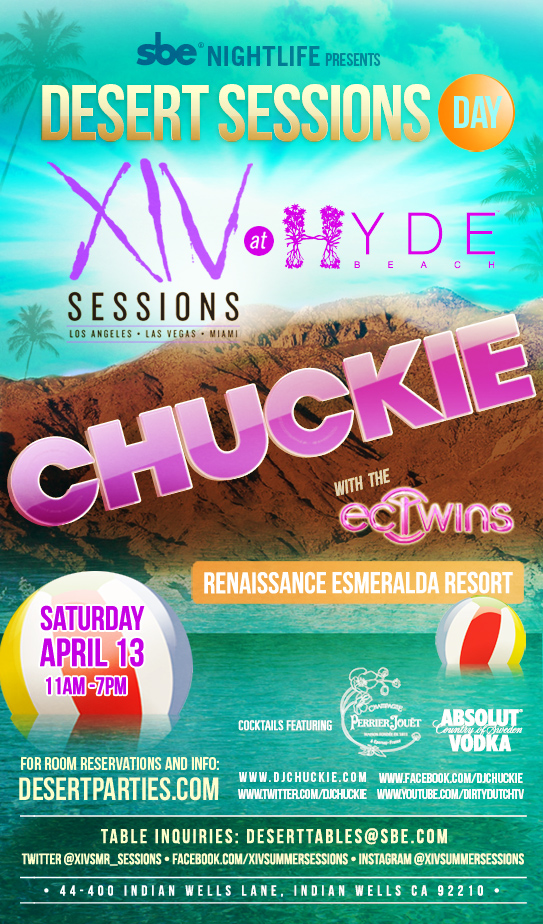 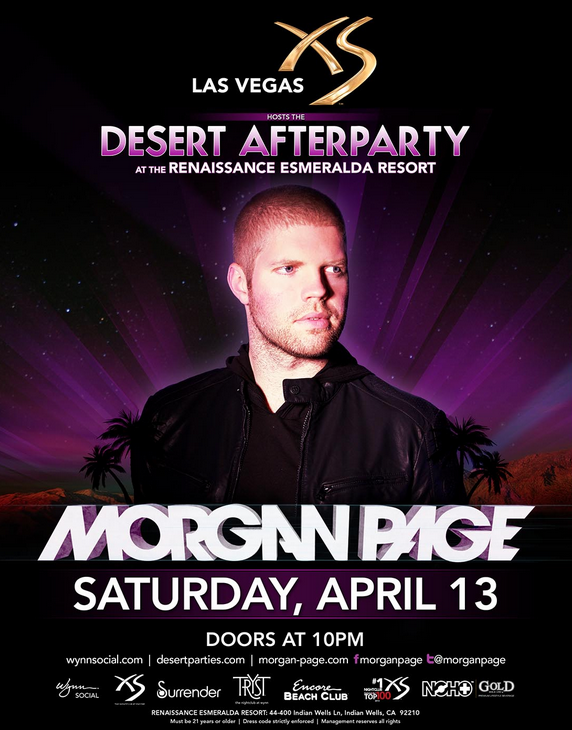 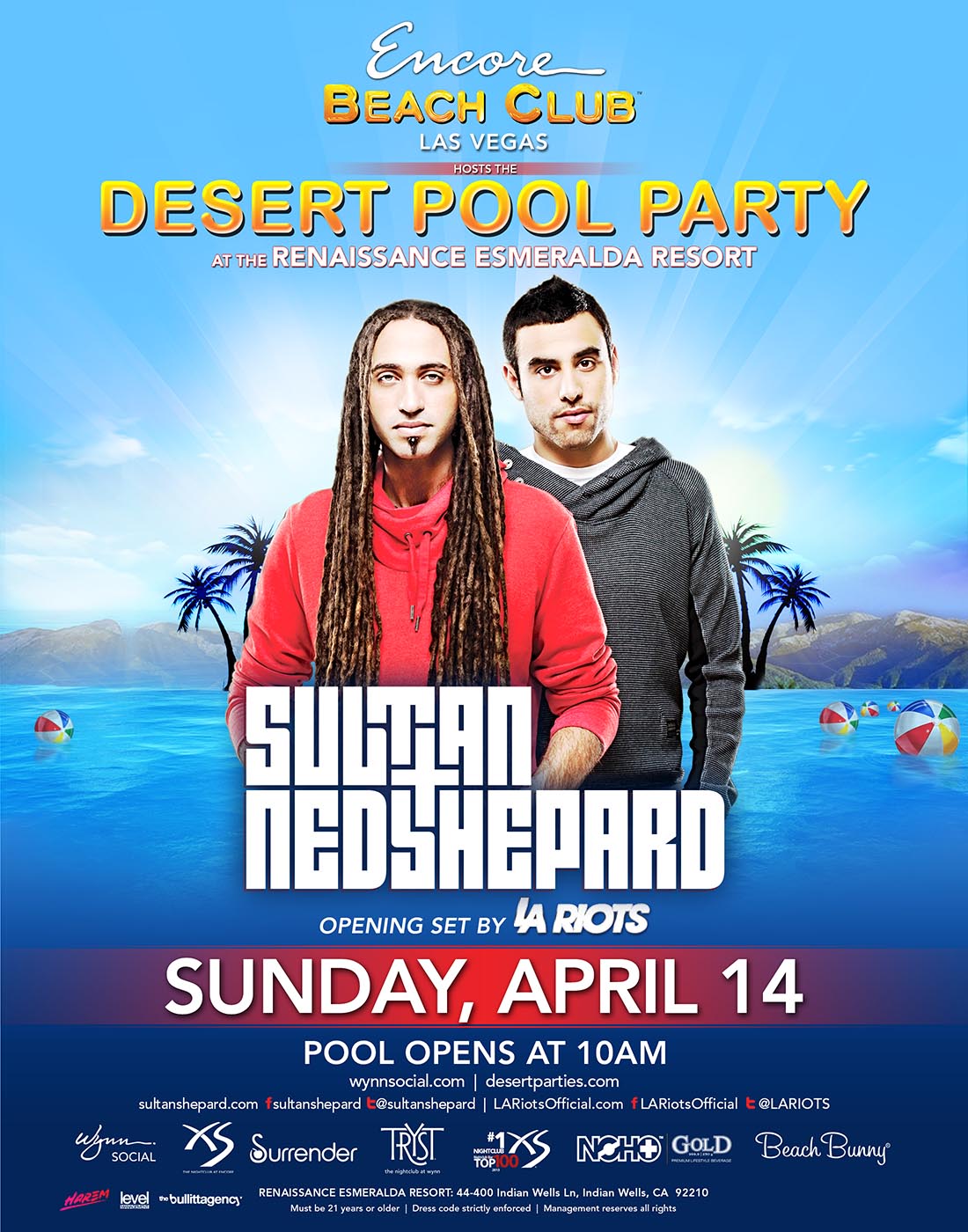 Who: People willing to shell out a few thousand dollars for table service.
What: Vegas-style pool parties have come to Coachella.  Nervo, Chuckie, Morgan Page, Ned Shepard and Sultan will be DJing a series of pool and after parties.  The parties are hosted by XS, Surrender and Absolut Vodka.
When: All first weekend of Coachella.  See above posters for exact times and dates. Buy tickets here.
Where: Renaissance Esmeralda Resort. 44-400 Indian Wells Ln, Indian Wells, CA. [see map] (About 20 minutes to Coachella). 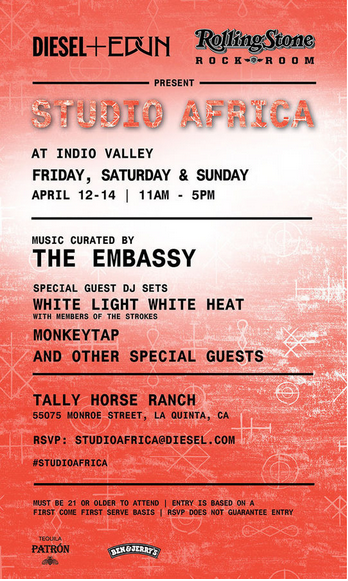 Who: People that RSVP by emailing studioafrica@diesel.com
What: Classic Coachella pre-party, but without a pool. DJ sets by White Light White Heat (w/ members of the Strokes), Monkeytap and others.
When: All weekend, April 12th – 14th
Where: Tally HorseRanch, 55075 Monroe Street, La Quinta, CA 92253 [see map] (Literally 5 minutes away from Coachella. You could walk if you had to).

Who: Invite Only
What: Mia Morretti DJing and free manicures (really?)
When: All weekend
Where: The Park Palm Springs Pool, 4200 E Palm Canyon Dr, Palm Springs, CA 92264 [see map] (about 40 minutes from Coachella)

Who: Again, you have to know someone
What: A preview of Guess’ new “Festival” collection. Music by Alex Merrell, DJ Kurch and Travis Emmons. Another Palm Springs event that’s far away from the Coachella grounds.
When: 12:00 – 5:00pm Saturday and Sunday, April 13th and 14th.
Where: Viceroy Hotel Pool. 415 S Belardo Rd Palm Springs, CA [see map] (45 minutes from Coachella). 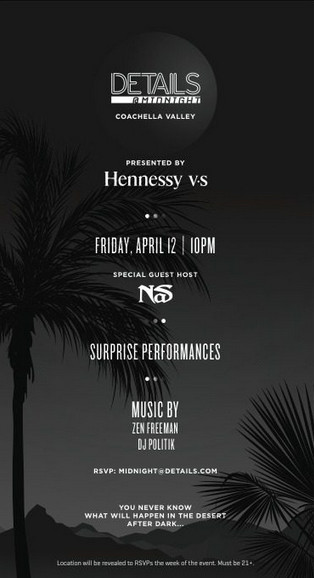 Who: RSVP to midnight@details.com
What: An after party hosted by NAS, should be a good time. Music by Zen Freeman and DJ Politik. 21+
When: Friday April 12th @ 10:00pm
Where: unknown [see map] 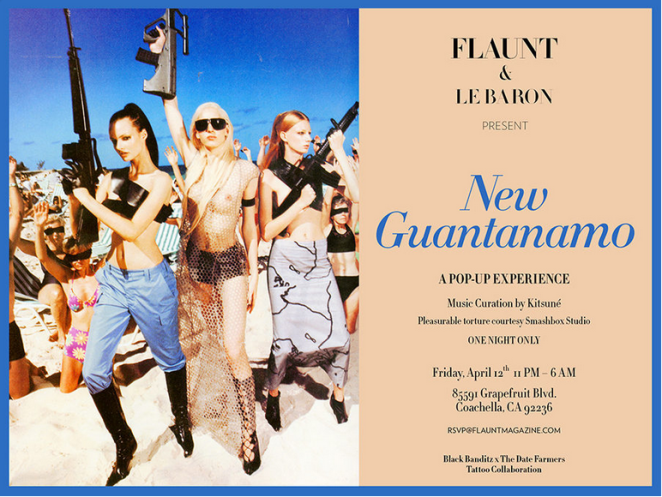 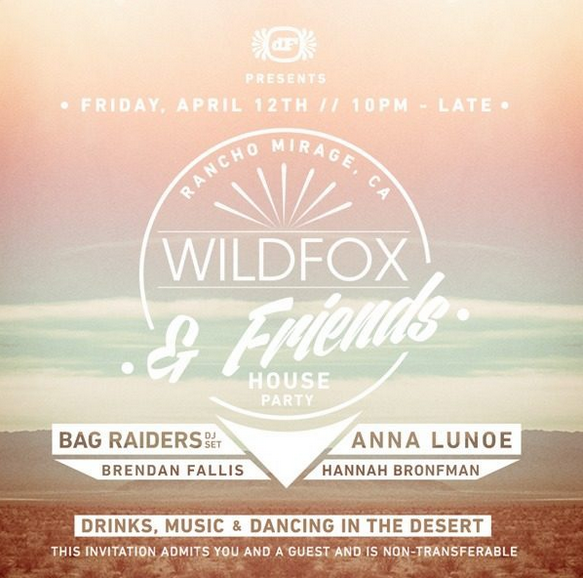 Who: Must be invited (print out the image above).
What: A good ole’ house party, but with Bag Raiders DJing. Anna Lunoe, Brendan Fallis and Hannah Bronfman too.
When: Friday April 12th. 10:00 – late….
Where: Somewhere in Rancho Mirage [see map]

Who: McDonald’s lovers (I’m ont loving it).  Invite only.  RSVP to coachella@bootsybellows.com
What: LA Club Bootsy Bellows is co-hosting this party which features performances by Manufactured Superstars, Capital Cities, Eletrik People, Beefowl, Ferras and Wade Crescent.  Rumor has it that Carmen Electra is the “host.”
When: Saturday April 13th, 2:00 – 7:00pm
Where: Park at 39001 Monterey Avenue in Rancho Mirage.  Shuttle service will be provided to the estate.
[see map]

If you have a wristband, the best place to be all weekend is at the festival and at the campgrounds by night. But if for some reason you couldn’t get a wristband, then consider heading out to the desert cities to party at one of the pool parties.

If I missed a party, feel free to contact me and I’ll add it to the list.