This is an old post, visit our Coachella 2023 parties: pool parties and after partys.

Coachella pool parties and after parties have been growing in number and size year after year and are now like the best Vegas pool parties. And there’s something for everyone, from exclusive celebrity-filled parties hosted by fashion brands, to private house parties, to an underground all-night party. (It’s important to note that none of these parties are in anyway affiliated with the Coachella Music Festival).

With Coachella tickets hovering around the $500+ range, many Los Angelenos choose to book a hotel room and stick to the pool parties and avoid Coachella all-together.

Your party isn’t listed? Submit a Coachella pool party or after party here. 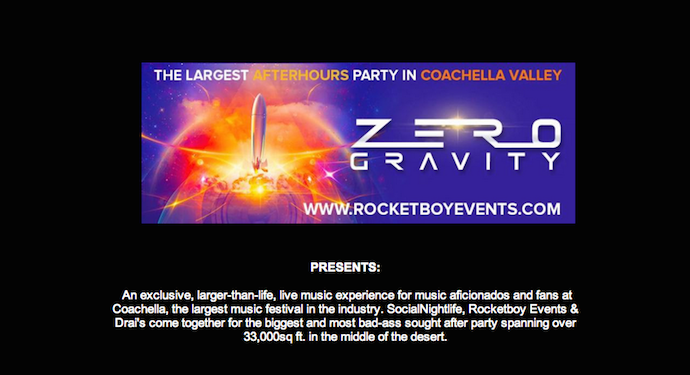 Who: This party is the only party open to the public! RSVP Here.

What: “ZERO GRAVITY presents an exclusive, larger-than-life, live music experience for music aficionados and fans at Coachella April 11th – 12th andApril 18th-19th that the largest music festival in the industry. SocialNightlife, Rocketboy Events & Drai’s come together for the biggest and most sought after party spanning over 33,000sq ft. in the middle of the desert with geo-domes, art & light installations and a 65 Foot Rocket Ship! Sponsors also include:  CIRCO, ICELANDIC, Billecart-Salmon Champagne and UBER.”

There will be parking available for 3,000 cars, or get a free ride with UBER: www.uber.com/GO/ZEROGRAVITY 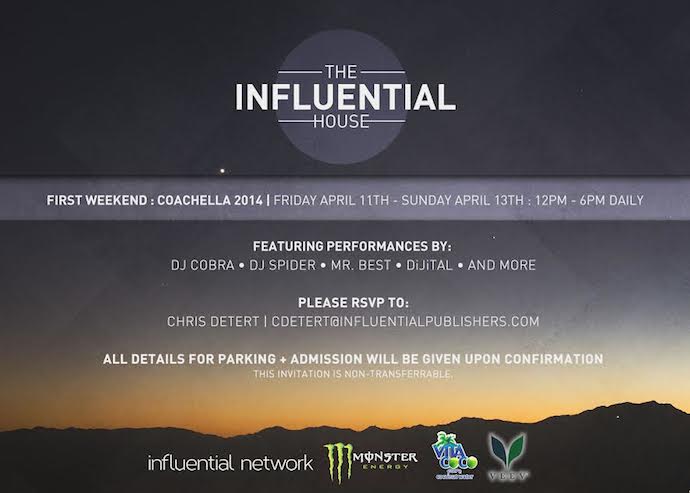 Who: Anyone that RSVPs to Chris Detert: cdetert@influentialpublishers.com

Where: RSVP, and directions will be emailed to you! 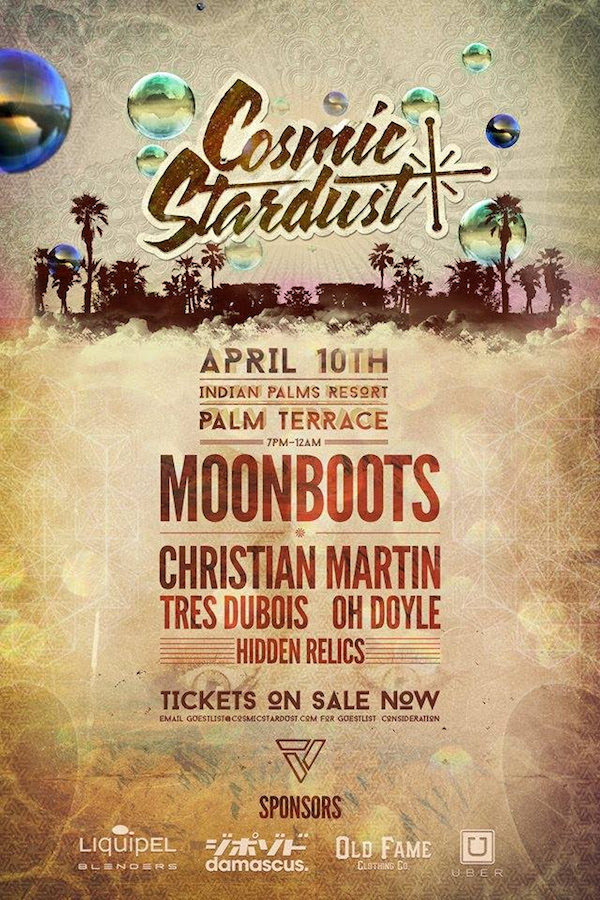 Who: The Guest list is limited to Industry only, musicians, agents, celebrities, corporate members, and Coachella event staff. 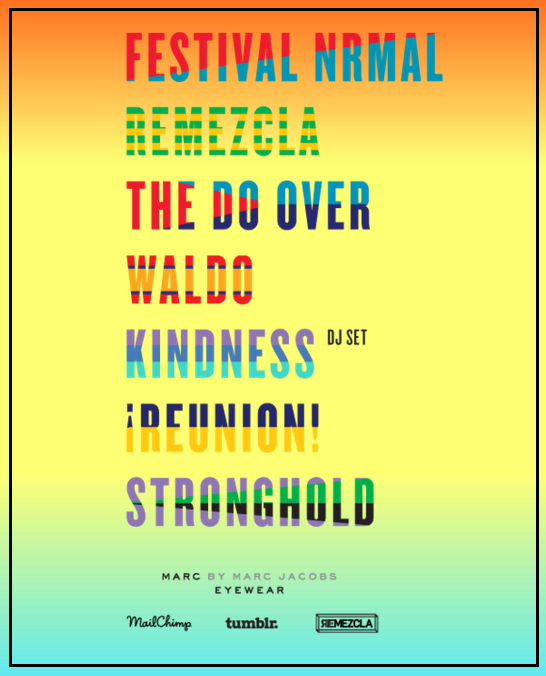 Who: Pool party events are open to the general public and all ages, but priority is given to guests of the Ace Hotel. If you want to get in, make sure you arrive before noon! RSVP HERE. Events in the Amigo Room are 21+.

What: The Ace Hotel is invited Festival NRMAL to program the Swim Club Pool from 12–6 p.m. and the Amigo Room from 10 p.m.–2 a.m. Check here for the full calendar of events. 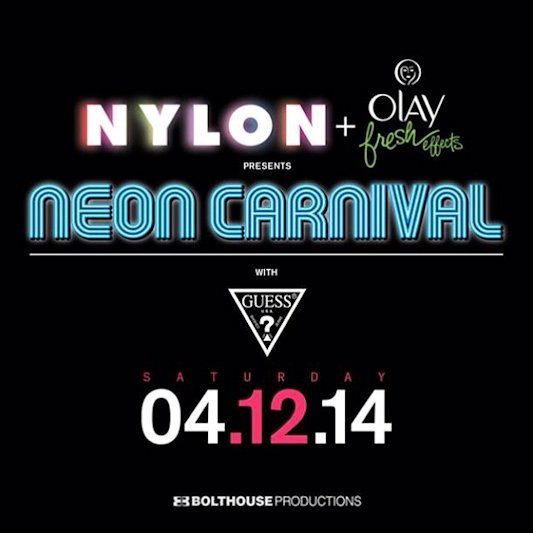 Who: Probably the most exclusive party during Coachella weekend, you’ll need to be on “the list.” 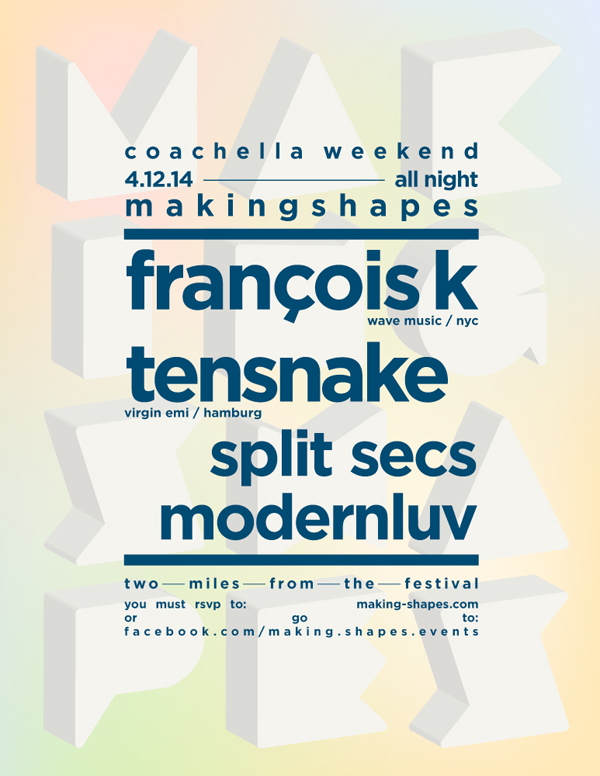 Who: You! Get a ticket here. This will sell out.

What: LA’s underground party comes to the desert for an all-night event. If you still have some energy left after Coachella ends around 1:00am, then this is the party you’ll want to visit. DJ Sets by Francois K, Tensnake, Split Secs and Modernluv 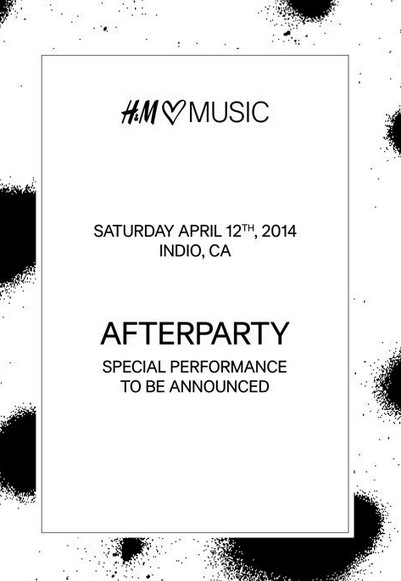 Who: Anyone with an invite, which are hard to get!

What: Because H&M is a Coachella sponsor, this is the closest thing to an official after party. Last year, the event featured a performance by Santigold. H&M promises to announce another big name performance in the coming days. 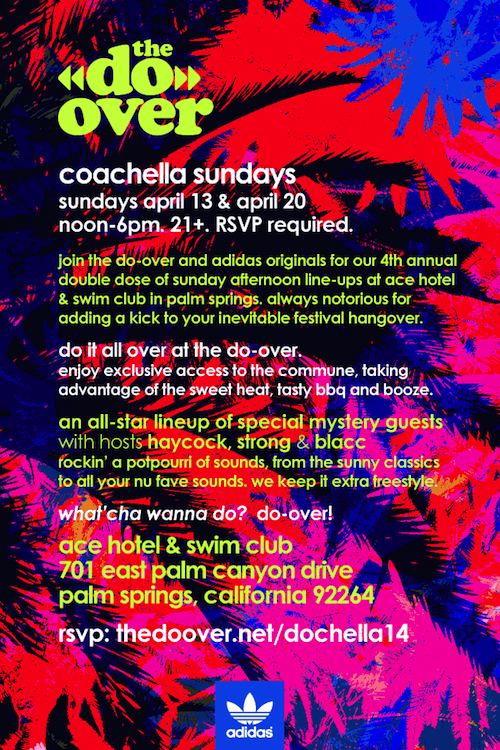 What: Returning for it’s 4th year in a row, the Doover is partnering with Adidas Originals to host a classic Coachella pool party. 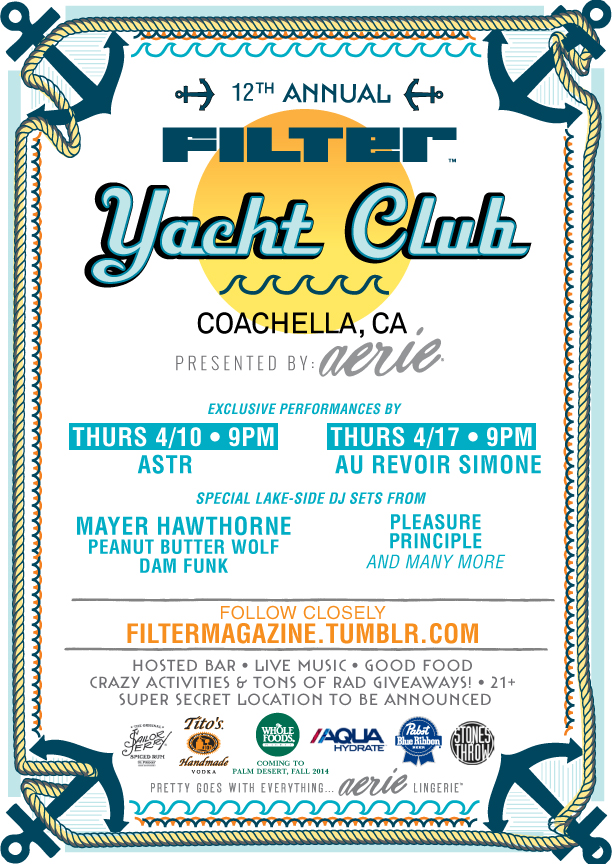 Who: You can RSVP here, but there’s no promise you’ll be sent an official invite.

What: Filter’s Yacht Club is the biggest and best known Coachella kick-off party. The event features tons of free product giveaways from the sponsors, and live music performances by Mayer Hawthore, Peanut Butter Wolf and more. 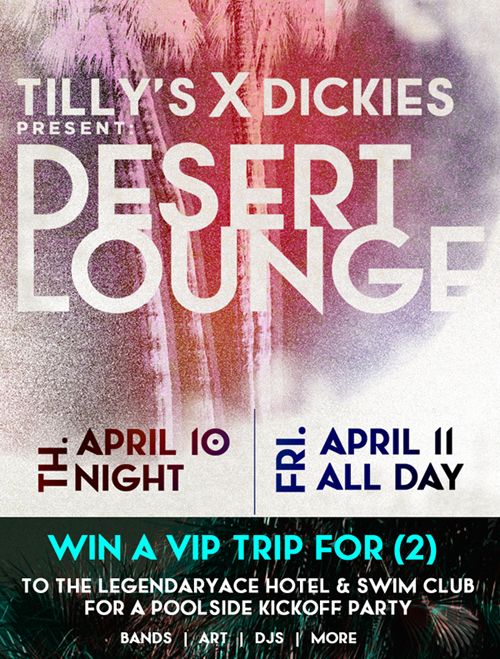 Who: Anyone that RSVPs using this link. 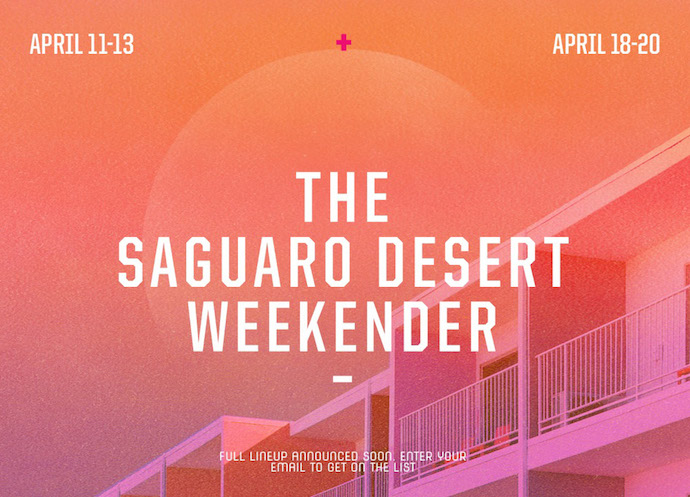 What: The Saguaro knows how to put on a great pool party, and the Desert Weekender has become a Coachella weekend staple.

When: All weekend, both weekends. More details to follow. 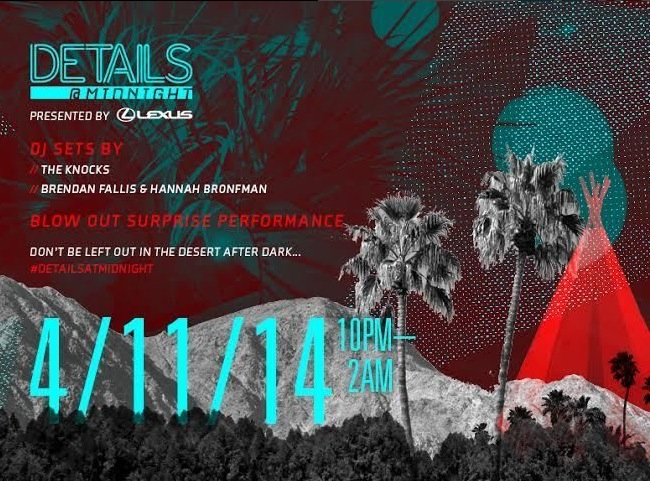 What: An after party hosted by Details Magazine and sponsored by Lexus. Performances by The Knocks, RAC and Hannah Bronfman. 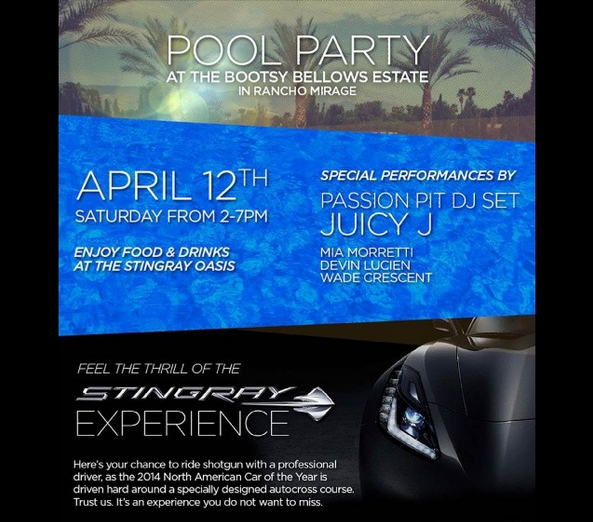 What: Performances by Juicy J and a DJ set by Passion Pit. You can also take a ride in a Chevrolet Stingray Corvette with a professional driver on a race car track. Sounds interesting. 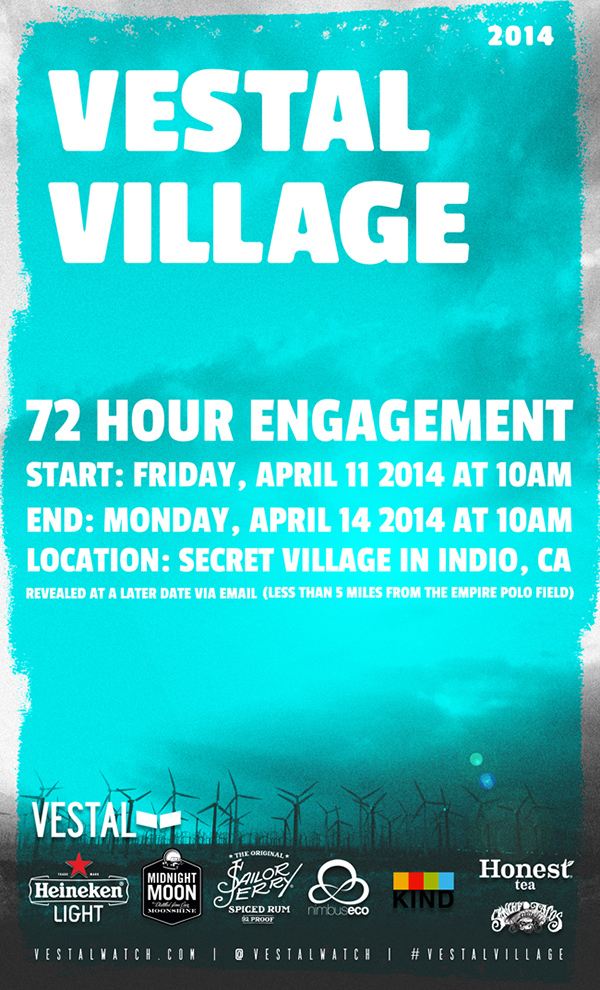 Who: People in the surf-skate-snowboard industry, Vestal Team Riders, and guests of Vestal. There is not RSVP list, so please don’t ask.

What: The Vestal Village is basically a giant, private campground on an estate near the festival. There is plenty of live music, boozes and room to run around and get rowdy.

Where: Private Village in Indio, [see map] (5 minutes from Coachella) 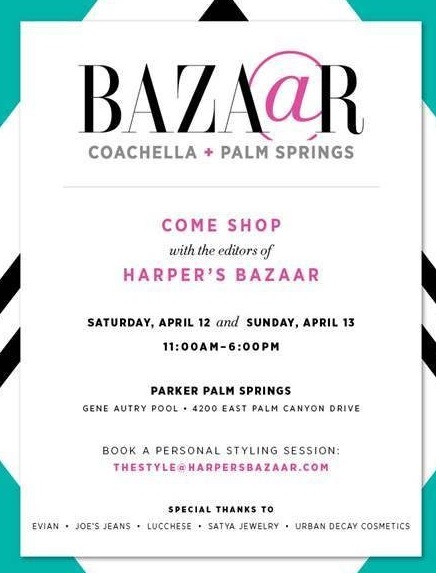 Who: This is a private party, but if you book a styling session you can get in: thestyle@harpersbazaar.com 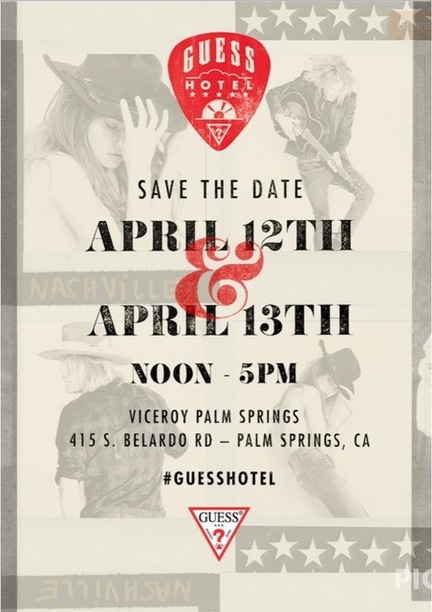 Who: Celebrities and celebrity wannabes. 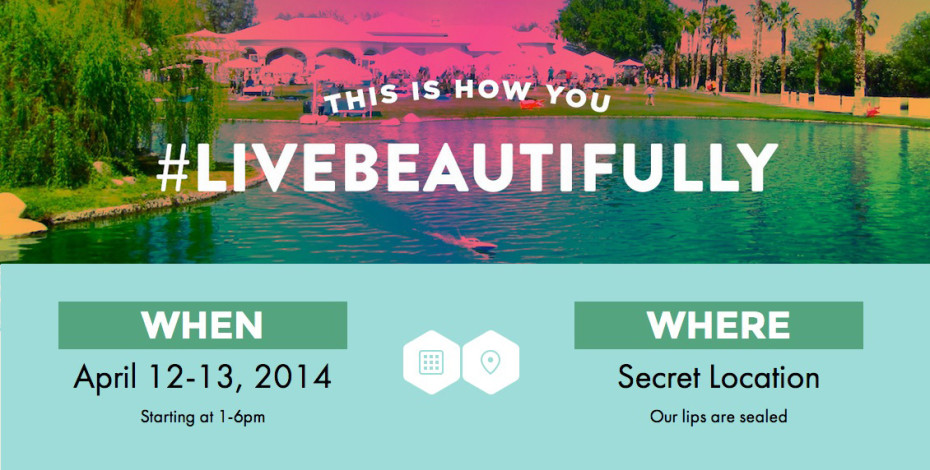 What: Alligators, a pond, giveaways, celebrities and pools. More details on the website. 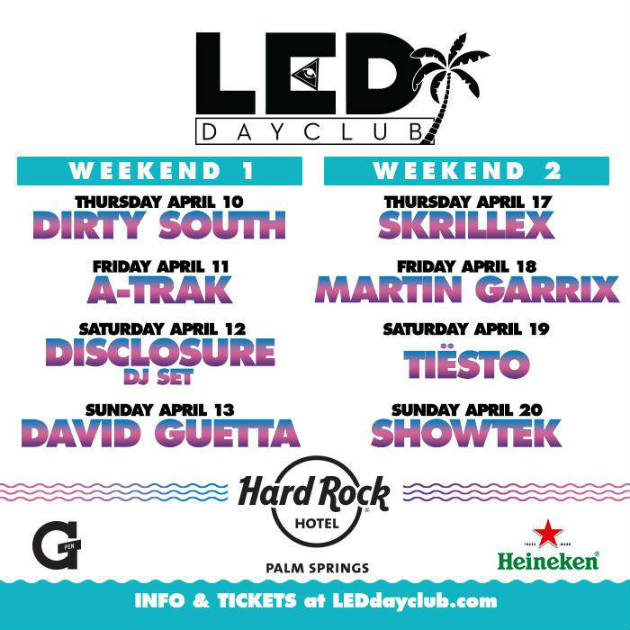 Who: Anyone with a ticket or private cabana reservation. Get your ticket here. Prices range from $40 to $60

When: There’s a en event each day of the Coachella week.