-TravelGrom contributor Sean Panganiban went to New York for the next big thing: Governor’s Ball. Here’s how it went down.-

The 4th annual Governors Ball took place June 6th-8th on Randall’s Island, in the New York City borough of Manhattan and my friends and I were only in New York for the weekend, strictly for Governors Ball.

With 45,000 attendees, it’s considered a smaller scale music festival, but in my opinion it has the potential to become one of the bigger ones in North America. For our sake, we hope not, because we enjoyed everything about it and want to keep it for ourselves. But In the own words of the festival organizer on the last day of the event, “In a few years, we’re going to make Bonnaroo and Coachella look like small potatoes!”

We bought the $50 ferry ride option to the festival that was provided by Governor’s Ball. I thought there would be music, drinks and a wild party on the ferry ride, but we definitely bought the wrong tickets. When we approached the dock on the first day, there was another ferry full of people that looked like they were having the time of their lives. Seriously. Their boat was “Project X” in comparison to ours. Music was blasting and drinks were clinging in cheers. To add a little salt to the wound, my friend Jay and I were looking at the boat in complete envy, and we heard a girl call us “the loser boat”. It hurt mildly, I won’t lie. 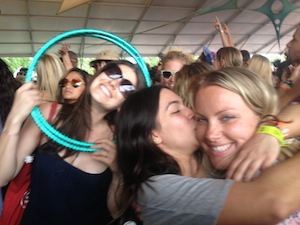 I can’t complain though, because our ferry ride wasn’t so bad. It took us to and from the festival all 3 days and it was actually very calm and relaxing. It’s actually a really great way to see New York City, because you pass (what I believe to be) many historic buildings and bridges as you stroll away from the New York City Skyline.

It’s also a great way to meet people, as a girl dressed as a fairy Godmother, pranced over to my friend Jay and began to tell him her life story. We suspected she was on drugs, but she didn’t have any left. 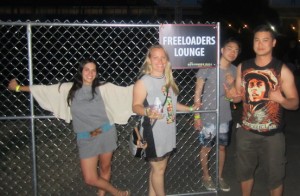 We were able to score five $500 V.I.P passes for $150 each for the music festival. It’s a lengthy story, but in summary it involved us going to Queens, finding a guy through Facebook named Evan, who was kind of an oddball and actually had to ask my roommate if they hooked up in the past or not, because “he wasn’t quite sure”. She denies she did, but that’s debatable.

The V.I.P passes gave us access to the “Freeloaders Lounge.” It was off to the left of the main stage and it had green lush grass with amenities so nice, I could easily say it was the most elegant “number 2” experience, I’ve ever had at a music festival.

Unlimited booze, was the name of the game in the “Freeloaders lounge”. Beers, shots and specialty drinks, as much as your heart desired. If we actually would’ve bought the V.I.P pass for $500, for around what have been an extra $200 more than a regular pass, it was definitely worth it. Beers in the grounds were going for either $7 or $13 a pop. However, it does come with a caution if you’re a “once-a-drink-hits-your-lips-I-just-can’t-stop” type of drinker like my friends are. You’ll most certainly miss out on a lot of shows as you seemingly become funnier as the liquid courage increases.

“Ok, we’ll see a little bit of Kid Cudi, but only stay for 15 minutes and walk over to MGMT, but I hate their newer stuff, so we’ll only stay for 10 minutes, and then walk to the dance tent for Tiesto for 20 minutes, which will give us enough time to finish the night at Outkast.” Does this sound familiar to you? Yes, first-world-music-festival-problems at its finest; too many artists playing at the exact same time.

However, at Governor’s Ball, there are 4 stages, but only 2 artists are playing at ANY time. It’s a great way to reduce your “MUST SEE EVERYONE, AS MUCH AS POSSIBLE” anxiety. Of course, you still have to choose between two artists, but when the choice is between Jack White and Skrillex, I’ll choose the legend of our time, Mr. White. His performance enthralled me, and took me on an adventure to the deepest corner of his enigmatic mind. He played everything from his solo songs, to The Raconteurs, Dead Weather, and The White Stripes.

Outkast’s performance was off the “hizzay”. I was able to brush up on my 90’s hip hop jargon, my own rap skills and of course was left saying “Hootie-Hoooo” for the rest of the night.

Other than the headliners, TV on the Radio and Damian Marley were some of my favorite performances of the weekend. TV on the Radio played their first show in over a year; they definitely fed off of their hometown crowd and vice versa. I didn’t recognize many songs from Damian Marley other than the ones from his “Welcome to Jamrock” album. But when you have a professional flag waver, waving a flag nonstop from start to end, with the aroma of some fresh sticky icky, you’re going to gain some fans. 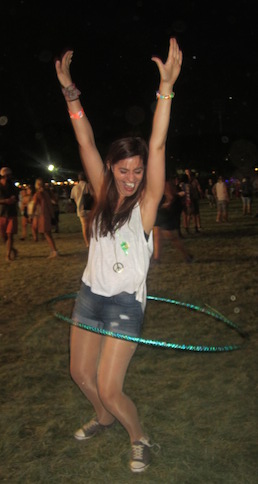 The weather was absolutely perfect all weekend. Shorts and tee shirt from the start until end of the day. The people I met at the festival were absolute beauties. Out of any music festival I’ve attended, I felt Governor’s Ball was the easiest to meet and connect with people. Perhaps it had something to do with the festival’s smaller attendance (45,000)? Perhaps it had something to do with the hula hoop our friend Lori left us, which girls would flock to. I’m not too sure.

Actually, I think the hula hoop had a lot to do with it. But aside from that, the people at the festival were friendly, cool, with a laid back vibe. At other music festivals, you’d normally see at least a few people freaking out and crawling on all fours because they dropped their molly in a puddle. Or how about a fucked up naked guy prancing with glow sticks, giving himself a light show? No. Not at Governor’s Ball.

Everyone there was just, plain, COOL. Want to be best friends for an hour? Sure! Would you like to play bean bags? Right on! Want to cover me while I pee on this pole? Okie dokie! My friends and I have never received more numbers or Facebook contacts at a festival, than we did at Governor’s Ball. I thought Coachella people were “chill”? Nah man, these people were CHILL.

“How you doing out there, New York?” just sounded fuckin cool, no matter which artist was saying it. The Strokes played one of their first shows in three years in front of their home town crowd of New York City and it was complete madness.

Being 2500 miles away from home and having the opportunity to sing “You Only Live Once” with the Strokes and thousands of other locals, was one of the reasons I went to the festival. But knowing you’re in the most populous city in the United States, with its immense history and the Manhattan skyline to the right of the main stage just added to the euphoric state I was already in.

The festival is in its 4th year and I felt it was mainly comprised of people living in New York and surrounding areas. That allows someone like me, who is only visiting for a short stint all the way from Canada, to enter a “New Yorkers” worldview. To connect with them on a more personable level, while sharing a common bond, that being the love of music. I’m sure that will change in a few years, as the festival sprouts into popularity. But listen folks, if you’re looking for top notch music, a well-organized festival while entering the New York state of mind? I suggest you make Governor’s Ball your next music festival destination.