Sasquatch music festival is held every Memorial Day weekend at the beautiful Gorge in Central Washington.

The view of the Gorge is very picturesque and is one of the most elegant things you will see in your lifetime. The festival averages around 20,000 attendees per year, which is significantly less than other major music festivals and it makes for a very communal vibe.

Coming from Canada, my friends and I have made the 12 hour drive to Sasquatch the last couple years and have agreed, if there is one festival out of the bunch that we would attend together, Sasquatch music festival would be the winner. If you’re planning on going to Sasquatch for the first time or have been curious about the festival, here are 8 things you should know:

1. Stock up on supplies 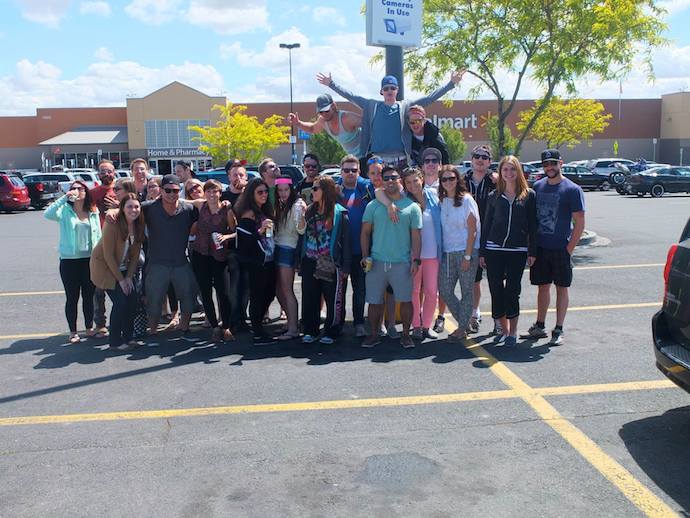 Camping is your only option at Sasquatch and you need to ensure you and your friends are well stocked. A bonus about driving to Sasquatch with my crew is that we’re able to take all of our camping gear and necessities from back home (Canada). One of the best things about crossing the border into the land of the free is that the booze is significantly cheaper!

There is a Wal Mart about a half an hour away from the camping site and that’s where we’ve loaded up on booze. Some food, but mostly booze. If you’re alcoholics like my friends and I, it is better to have more than enough, than not enough. And even when you think you have enough, add 1 more 24 pack because I can assure you, you will run out. Once you’ve added that 24 pack, you should probably go ahead and add that 12 pack of Twisted Tea’s.

One more thing, security does not search your vehicle when you enter the campsite. Not one bit. So go ahead, add the Palm Bay’s if you’d like. P.S. At the Wal Mart, it is wise to not offer beer bong hits to customers in the parking lot, as we’ve learned that it is frowned upon by Wal Mart management. 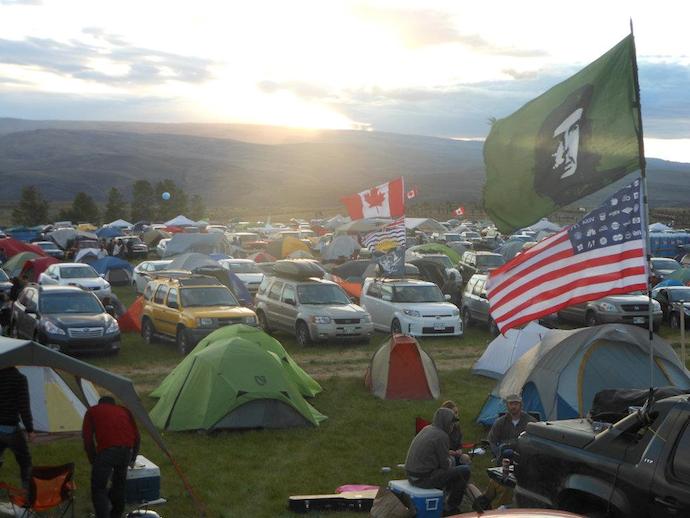 There are 4 different levels of camping at Sasquatch, but I’ve only camped in Standard camping and Premier camping. Standard camping is included with the purchase of your festival ticket and premier camping is $165.00 extra per vehicle. If you divide that by 4 people per vehicle that is an $41.25 extra per person. Not too shabby. Standard Camping – This is where majority of the people are camping, and it is a riot and total party. Also known as “District 9”, the area is very spacious in comparison to other major festivals I’ve camped at.

You want to have a jam sesh on top of a school bus with a bunch of hippies? How about a 20 on 20 Team Canada vs. Team America flip cup tournament? (we won by the way, eh). Standard camping has it all. There are showers that are accessible to all for the low cost of $3.00 per use. Premier Camping- How glorious it is. My recommendation? Pay the extra $41.25 per person. The shower is free, the wait times are significantly less and you still have access to standard camping.

The walk from the campgrounds to the festival grounds is anywhere from 20 minutes to 45 minutes, depending on your distance and the severity of your A.D.D. With premier camping, you get to ride a shuttle bus to and from the festival, at any time, and it is very convenient at the end of the day. 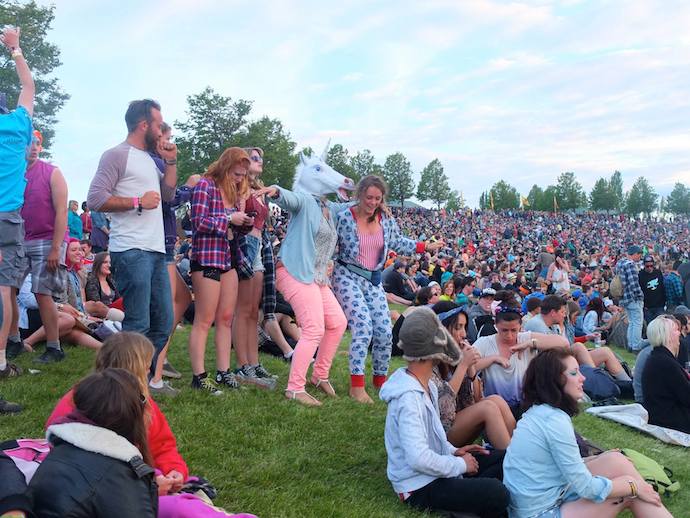 I was waiting by the food trucks one morning awaiting my breakfast burrito (absolutely delicious, by the way). I noticed a fellow Sasquatchian in his early 20’s with 2 giant X’s on his hands written with permanent marker. I was curious, and asked him what it was all about. “It means I got too fucked up last night”.

Getting Double X’d at Sasquatch means you essentially lost at beer pong too many times in a row, chugged back half a 2/6 of Russian Prince for shits and gigs and decided to show your whole crew that you’re the beer bong champion of the world. Yes. You got too fucked up.

When you’re “that guy”, security draws 2 giant X’s on your hands to let beer vendors and other security know that your drunk ass has been CUT OFF. The deal, from what I gather, is that when you’re sober enough to actually wash the marker off your hands, you’re sober enough to drink again. Watching drunk people do drunk people things is tons’o fun, but you don’t want to be “that guy”. Drink in moderation. Don’t get Double X’d!! 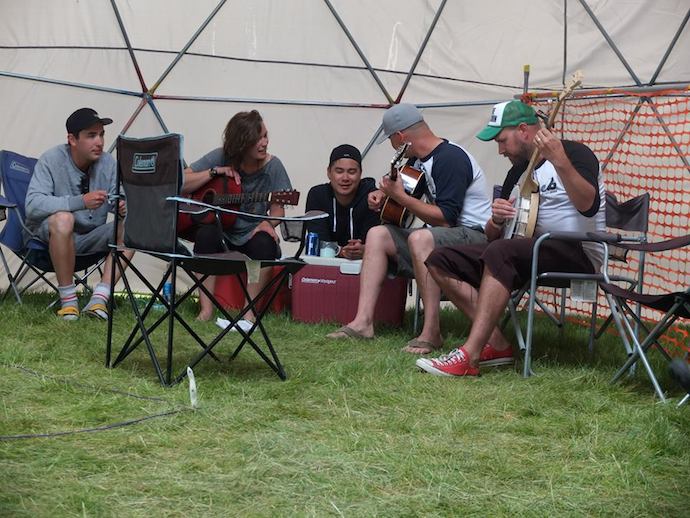 There are around 20,000 people that attend Sasquatch every year, about 50,000 people less than major music festivals like Coachella and Bonnaroo. With less people attending the festival, it creates a more intimate and personal experience. The vibe is less pretentious compared to Coachella (sorry, but it’s true) and the people are very wholesome and more friendly.

Last year, a couple had their wedding ceremony in the actual campground and they had initially met each other at Sasquatch a few years ago. Their friends constructed a huge dome for their wedding ceremony (the dome also served as a wicked dance party every night). I was fortunate enough to be apart of the wedding “band” and was volunteered to drum on a cooler (yes, a beer cooler).

The camping neighbors were invited and as the couple walked the “aisle” I drummed to the tune of “Such Great Heights” by the Postal Code, sung by the lead guitar player. At first I thought it was pretty comical to be drumming on a cooler, at a wedding, in the campgrounds of a music festival. But as the vows were exchanged and tears filled the eyes of the attendees, love filled the air and it was a very intimate moment, amongst a group of complete strangers.

HIDE YOUR BEER BONGS! Seriously. Security will take them, because they promote “mass drinking”. They will literally go through your campsite when you’re not there and take them.

Two years in a row we’ve had our dual-hosed beer bong confiscated. Sadly, as “first world music festival problems” would have it, we had to resort to simply “shot gunning” L. How sad. P.S. – If you’re a member of Sasquatch security and you’re reading this, we want those beer bongs back!!

6. Be Prepared for Unpredictable Weather

Sasquatch music festival is held at the Gorge, in George, Washington. The weather in Mr. George Washington is very unpredictable. It can be sunny one minute, pouring rain the next and at night I can almost guarantee you that it will be cold. Pack for all of the elements! Boots, raincoats, hoodies, shorts and bikinis!

Even if it rains, don’t let it deter you from maximizing your Sasquatch experience. Last year as I was watching Imagine Dragon’s set, the rain started to pour. As I looked to my left, in the distance, I could see a few people taking advantage of the rain and began sliding down the hill. Those few people turned into hundreds of people sliding merrily down the slippery hill!

The inner child in me wanted to join my fellow Sasquatchians in the everlasting joy and giggles, but alas, the inner hungry beast in me was too indulged in the succulent noodle bowl I had just purchased. But hey, as the ol saying goes “life isn’t about waiting for the storm to pass, but learning to dance in the rain” or “.. learning to slide down slippery hills at Sasquatch”.

7. Chill on the hill and get right in the pit 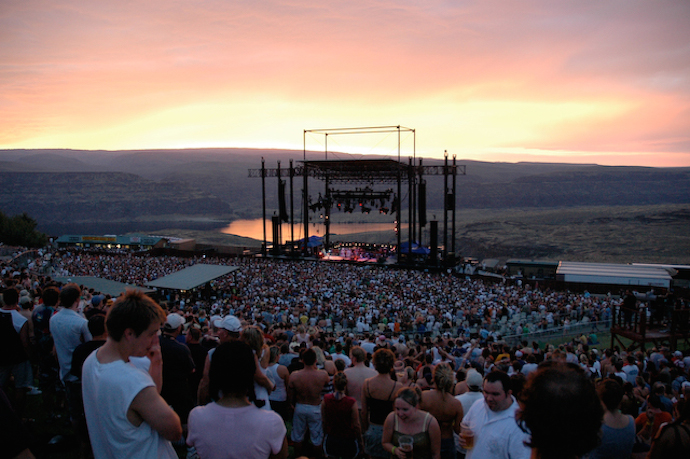 The stage at Sasquatch is an outdoor amphitheater, and no matter where you’re situated, the sound and view will be phenomenal. At Sasquatch, if you’re in a chillin’ mood and want to lay on the hill while grooving to the National, you’ll have an enjoyable time. As you lay on the hill and the sun starts to set, you’ll be looking at the beautiful backdrop of the Gorge. The orange rays of the setting sun will reflect magically off of the water, creating a very serene and calming atmosphere.

On the other hand, as the sun starts to set, what happens when the fuzzy peach candy you ate that was laced with acid that your friend didn’t tell you about, starts to kick in? You’ll want to get right into the action! You can march right down to that stage and get as close as you feel like! There are only 20,000 people at the festival; half are hanging out on the hill, others at different tents and some Double X’d and passed out! Get right in there!

8. Be considerate of others 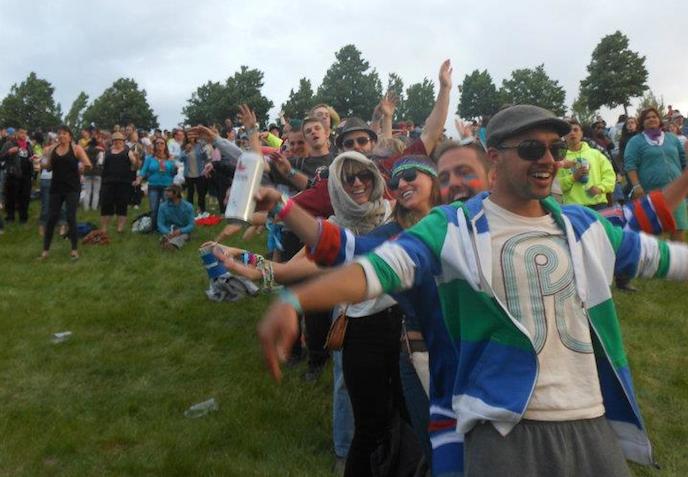 If you’re going to Sasquatch for the first time, you have to realize this could be someone’s tenth time. They know the ins and outs and the dos and don’ts.

To me, Sasquatch is a place where 10 years ago one would’ve been “that guy” washing off the double X’s off their hands, but now they’re changing their baby’s XL diapers. To them, Sasquatch is “their place”. It is a place they go to annually with their family and friends, to let loose and be free. Sasquatch is a smaller music festival that is essentially a community, filled with all sorts of different people.

Even though you’re at a music festival, you have to take into consideration of everyone around you. Realistically, this should be applied to your everyday life. Keeping a tidy campsite? Very considerate. Pumping that Avicii song from 2 years ago in the campground at 6am from your 92’ Integra? Not very considerate.

Have a great time and enjoy every moment, but be respectful and be considerate of others.