Surfer’s Ear never was a major concern of mine. Sure, I had heard about it and had even been warned about it. But I always thought surfer’s ear only developed in surfers that lived in Santa Cruz, Oregon and beyond. The water in Southern California was too warm to cause surfer’s ear, right?One day last winter, after an early morning surf in Ventura, I noticed that I couldn’t get water to drain out of my left ear. No matter how hard shook my head, how high I jumped on one foot, or how far I stuck a Q-tip in my ear, I could not get the water out. I waited a few days hoping that it would eventually evaporate, but to no avail.

I decided that it was a probably a good idea to head to my doctor, Dr. Michael Merrin in Santa Barbara. I was hoping that the doctor would find a build up of wax and after a quick ear canal cleaning, I would be on my way home. I was shocked when told me I had severe surfer’s ear… in both ears!

Developing surfer’s ear at such a young age was a big surprise. I guess all the years of those early morning surf sessions before school in 58 degree water finally caught up with me. No wonder the surf PE instructor always wore earplugs!

What is Surfer’s Ear?

Surfer’s ear (the common name for exostosis) is the name given to a bony growth that develops inside the ear canal. The ear canal is basically a cylindrical tube, and when the tube is constricted by bone growth, you have surfer’s ear. 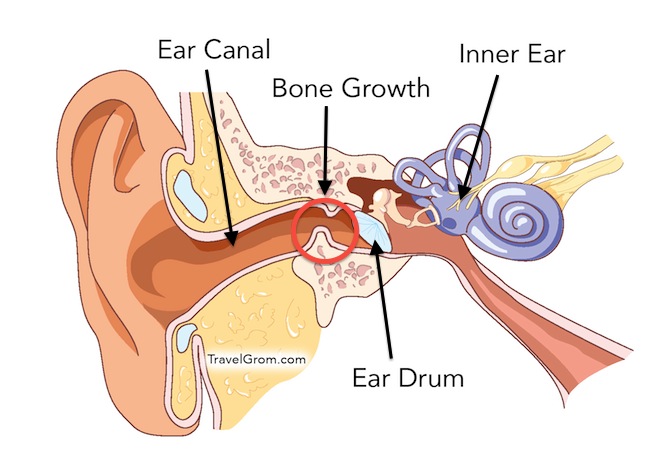 In my case of surfer’s ear, water had become trapped behind the bone growth and was sitting next to my ear drum. If the water stayed trapped for too long, an infection would have likely developed. 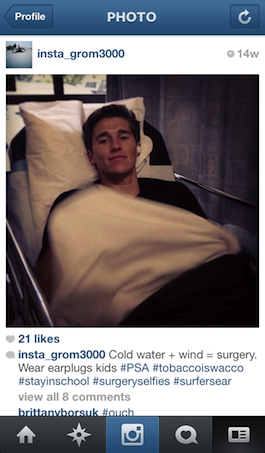 Dr. Merrin explained that surfer’s ear is caused by cold water and wind. When wind evaporates water out of your ear canal, it causes an extremely low temperature in the surrounding skin and bone. This cold temperature stimulates bone growth.

It’s not completely understood why cold temperature causes a bony growth to develop, but doctors believe it’s an evolutionary defense mechanism.  Basically, your body reacts to cold temperature by growing a protective layer of bone around the ear canal to stop cold water from entering it.

It should be noted that surfing is not the only activity that will cause exostosis. Swimming, skiing, diving and even driving a convertible can cause tiny bone growths in the ear.

Unfortunately, my prognosis meant that I wouldn’t be able to walk out of Dr. Merrin’s office with a simple ear cleaning. My worst fear came true when Dr. Merrin explained that I needed to undergo a canaloplasty in both ears.

The traditional surgery to correct surfer’s ear required making a large incision in the back of the year so that the outer ear could be folded forward which gave doctors access the canal. Then, a drill was used to widen the canal by shaving off the bone growth.

Luckily for me, Dr. Merrin preffered a minimally-invasive type of surgery that used an osteotome and curette. Watch the video below to see the surgery in process (fast forward to 1:49).

This type of surgery allows for a quicker recovery time (out of the water for about 3 weeks per ear). I took oral anti-biotics for the first week and then used ear drops for the second and third week.

What’s the worst thing about surfer’s ear surgery? The price tag: $15,000 per ear! Thankfully I had insurance and it payed for most of the surgery.

How to prevent surfer’s ear 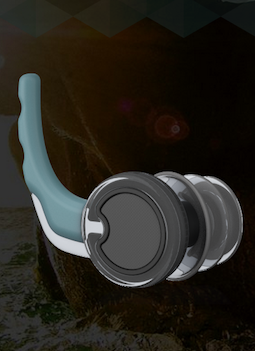 The good news is that surfer’s ear can be prevented. Ever see those surfers at your local break wearing neon colored ear plugs? You probably made fun of them, but hopefully now you will decide to join them.

Ear plugs keep water out of the ear canal and can be bought at your local surf shop for around $15. I had custom ear plugs made for $160 but they both fell out and I lost them. Now I use SurfEars and I highly recommend them. They fit snug and don’t block sounds like every other ear plug on the market; being able to hear while surfing is a must. Pick some up and save yourself a trip to the ear doctor.

Dr. Merrin told me that sometimes ear plugs are not enough. Some surfers develop surfers ear even if they use ear plugs because the cranium around the ear canal gets cold.  He recommended wearing a wetsuit hood on the coldest winter days.

The bottom line is that surfer’s ear sucks.  You will miss 3 weeks of surfing for post-surgery recovery (per ear) and be left with a hefty bill.  Don’t even think of getting the surgery without health insurance.  If you haven’t developed surfer’s ear yet, then you can prevent it by wearing ear plugs when you surf in cold water.