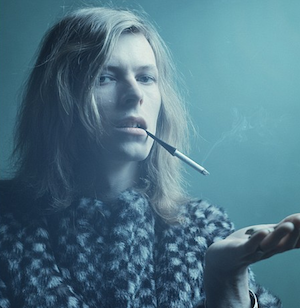 David Bowie has long been a Coachella headliner-hopeful, and  aside from Daft Punk, is probably the most requested artist year-after-year. With the release of Bowie’s 2013 album The Next Day there came talk of a supporting tour, but nothing ever materialized.

Related: Where to still get Coachella tickets

In fact, there were reports that Bowie would never tour again after he suffered a heart attack onstage in 2004, but Bowie’s long-time producer Tony Visconti eventually dispelled those rumors.

It’s been 8 years since Bowie last performed live (he sang “Changes” with Alicia Keys in 2006 at Black Ball) but  we won’t be surprised if Bowie join Arcade Fire on stage Sunday evening of Coachella Weekend 1, here are 6 reasons why:

Arcade Fire’s 2011 set was one of the most memorable headlining performances in Coachella history. The band brought a special type of energy to the stage; their album The Suburbs had just won the Grammy for Album of the Year, and Weekend 1 of Coachella just happened to fall on the birthday of Win Butler, Arcade Fire’s frontman and lead vocalist.

On top of that, the Creators Project teamed up with Coachella to create on-stage art installations, resulting in the now infamous Arcade Fire ball drop during their song “Wake Up” (see 2:00 in the video below).

That said, it’s going to be very tough for Arcade Fire to top their 2011 performance, but a David Bowie appearance just might do it.

A guest appearance by Bowie during Arcade Fire’s set wouldn’t be totally random; he sings backup vocals on “Reflektor.”

While Arcade Fire was mixing and putting the finishing touches on Reflektor, Bowie dropped by the studio and loved what he heard. In fact, he liked the song so much he threatened to steal it!

In a September 2013 interview with NME, Arcade Fire’s Richard Reed Parry explained: “It was just after ‘The Next Day’ had come out. He basically just came by the studio in New York while we were mixing, just to have a listen to the stuff we were doing. He offered to lend us his services because he really liked the song. In fact, he basically threatened us – he was like, ‘If you don’t hurry up and mix this song, I might just steal it from you!’ So we thought, well why don’t we go one better, why don’t you sing on our version? Thankfully he obliged, and we were really happy about that.”

3. AF and Bowie Have Collaborated Live Before

Arcade Fire and Bowie have played on-stage together several times before. Most memorably in September 2005 at the Fashion Rocks Fundraiser in New York, when they performed “Wake Up” together.

Arcade Fire has been known to occasionally cover Bowie songs during their live shows. Here are two examples of that:

In a recent interview, Win Butler and Time Kingsbury discuss how they first met Bowie, and how Bowie was an early supporter for their work.

David Bowie no stranger to music festivals, having played Isle of Wight, The US Festival, and Glastonbury.

In 2000, thirty years after his first appearance at Glastonbury, Bowie returned to the UK Music Festival, proclaiming it’s “fucking great.” He would say the same thing about Coachella!