THIS IS AN OLD POST FOR 2016 PARTIES. Visit the Coachella event guide for 2022 for current events.

Coachella parties are one of the main draws for people, aside from the festival itself. In fact, thousands of people come to the Coachella Valley during the weekend just for the pool parties and after parties.

Most Coachella parties are sponsored or hosted by some sort of fashion or music-related brand. Almost all events feature free product giveaways and interactive attractions.

Some Coachella parties are exclusive, invite-only affairs, while others are open to the public, but you should always RSVP to each event. None of the events are officially affiliated with the festival.

The following list will continually be updated as the Coachella weekend draws closer. If you would like your event added to the list, please email us here. 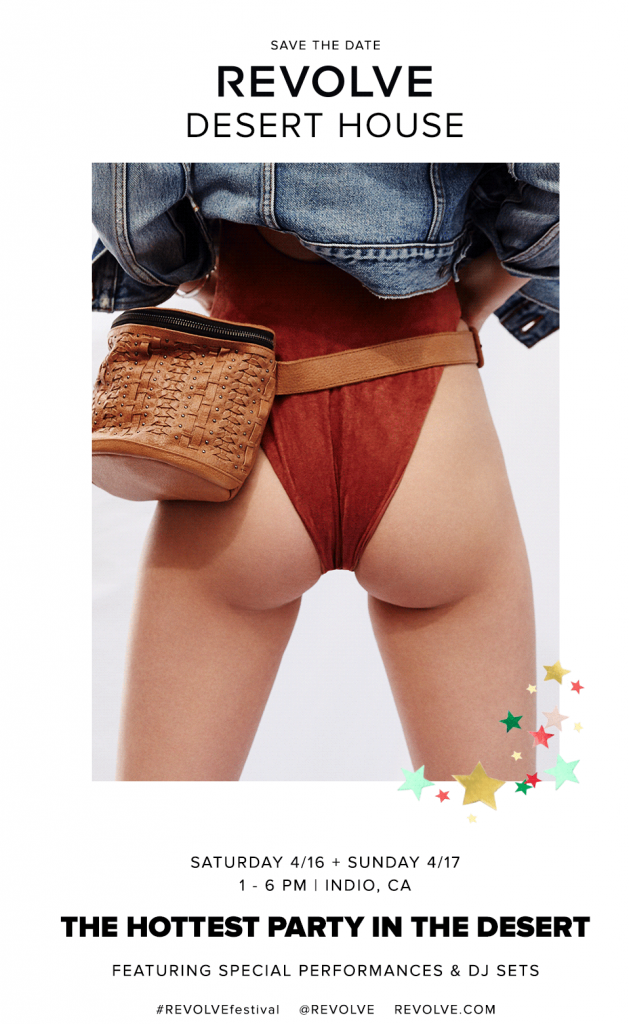 What: The REVOLVE Desert House is the destination for celebrities, models, and the worlds weekend.

Birchbox is hosting a beauty bar at the REVOLVE VIP party on Saturday, April 16 and Sunday, April 17. At the Birchbox Beauty Bar, attendees can pick from a selection of desert-inspired beauty kits from top brands like Milk Makeup, Benefit Cosmetics, Living proof, and Supergoop.

Where: Location will be announced closer to the date upon confirmation of attendance.

Get Coachella Weekend ONE Tickets 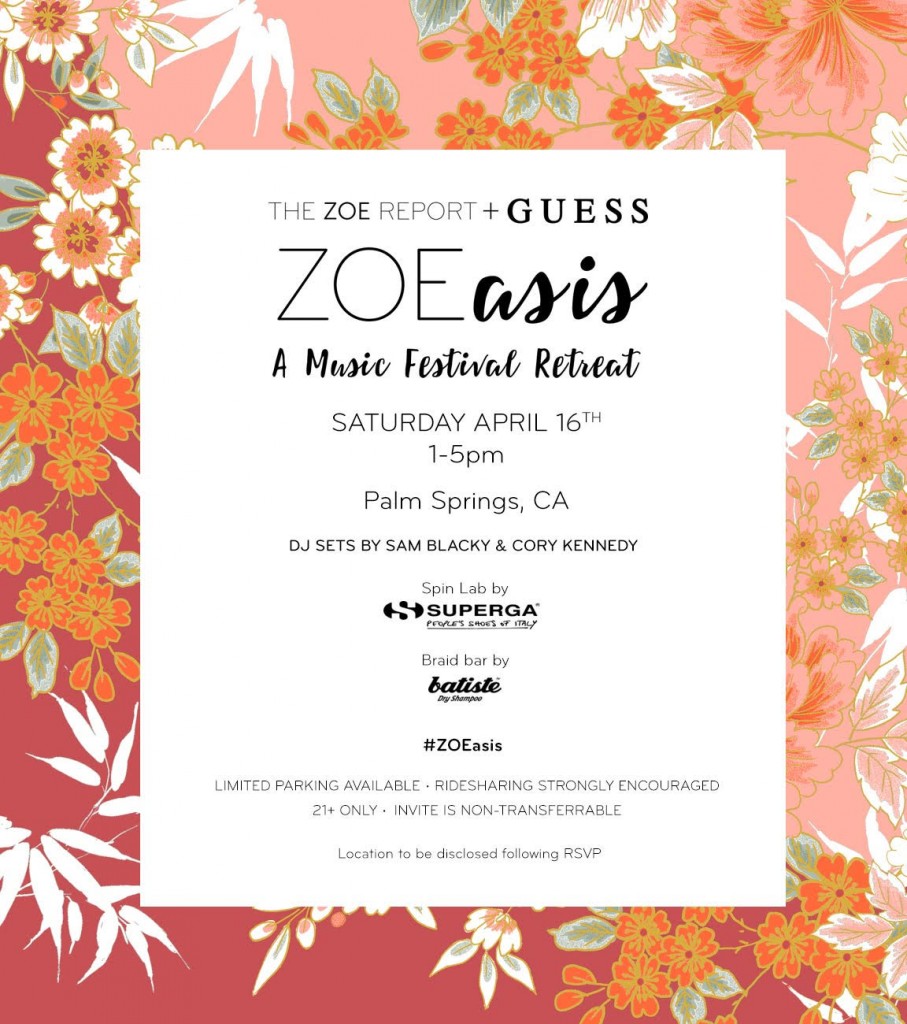 What: ZOEasis, a music festival retreat presented by The Zoe Report + GUESS. The Zoe Report and Rachel Zoe will be hosting a variety of exclusive style and entertainment experiences, with special-guest performances. To highlight the iconic styles of festival season, participating brands will activate unique DIY programs onsite for attendees. These activations include: a DIY denim bar by GUESS, spin-art presented by Superga, a braid bar hosted by Batiste Dry Shampoo, with crafted hand-made furniture provided by Harbour Outdoor and much more. 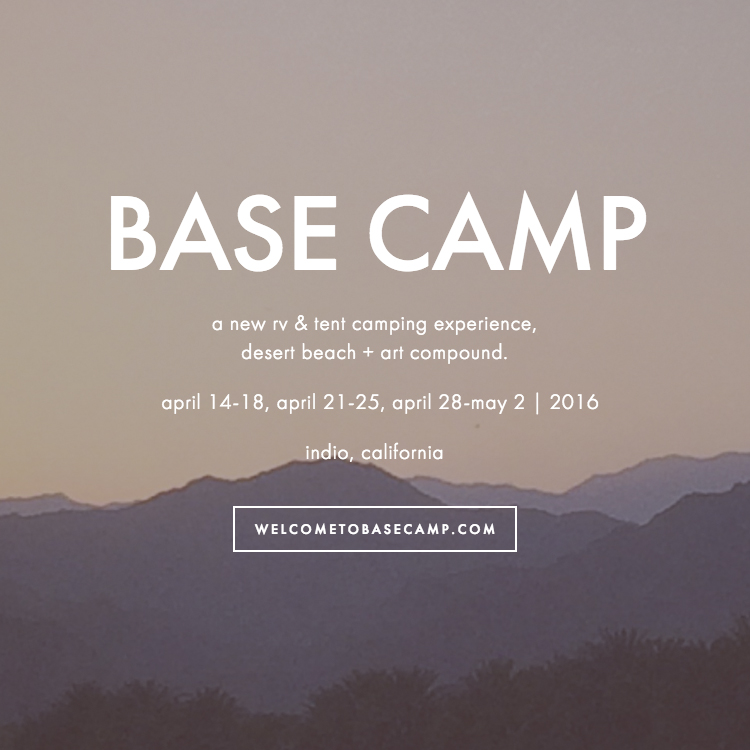 Who: Open to the public, found out more info here.

What: Base Camp, a new “off-site” RV and tent camping party has just been announced to take place during both weekends of Coachella as well as Stagecoach. This new pop-up campground is located on a 40 acre property just 6 miles south of the Empire Polo Field. Guests can reserve a spot for an RV, tent, XL tent or car camping.

Where: Private Compound, at the intersection of Jackson and 61st Street in Indio.

When: All 3 weekends (including Stage Coach)

Culture Collide “Not a pool party” 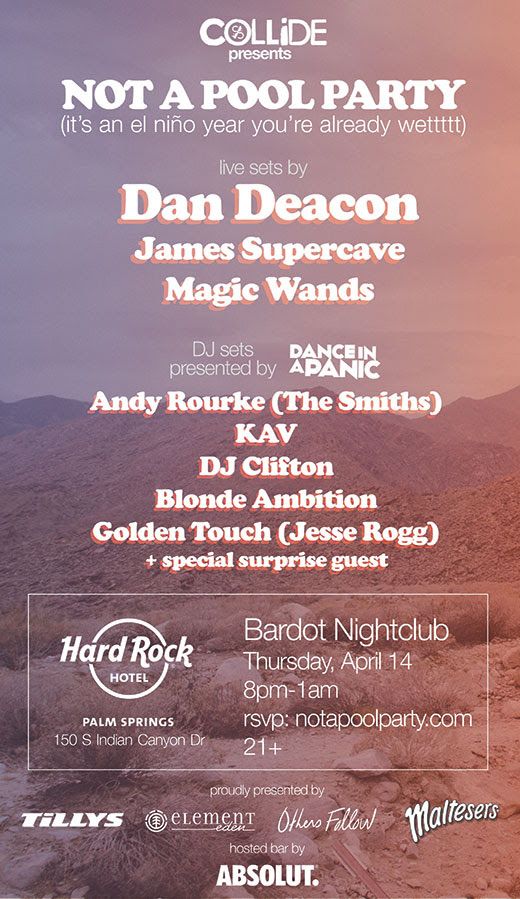 Who: This 21+ Coachella party is open the public, but entrance is based on capacity: RSVP here

What: The Culture Collide Coachella Party is returning to Palm Springs this year just in time to kick off the festival season with a bang! Head out to the desert and get wettttt with Dan Deacon, Magic Wands, Andy Rourke, KAV, DJ Clifton, and more! Presented by Tillys, Element, Others Follow, Maltesers and Absolut Vodka. 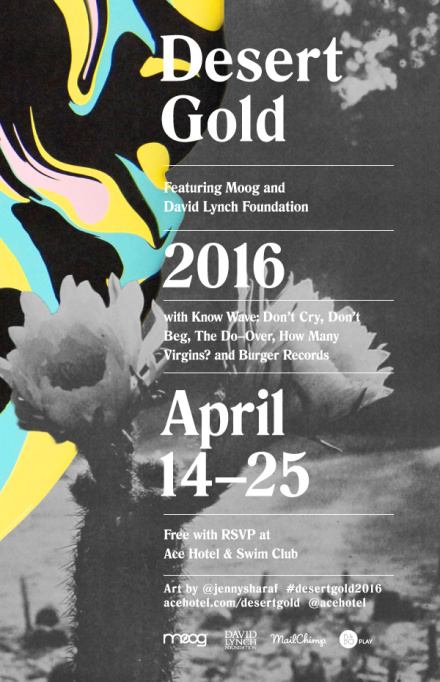 Who: Open to the public, RSVP here

What: While the Coachella festival rolls on, Desert Gold Coachella party will be ushering in an oasis of meditation and celestial beatmaking at our eighth annual Desert Gold, happening April 15–24 at Ace Hotel & Swim Club. With events by David Lynch Foundation and Moog, and poolside cameos by our friends at The Do-Over, Know Wave: Don’t Cry, Don’t Beg, How Many Virgins?, and Burger Records.

When: Both Coachella Weekends 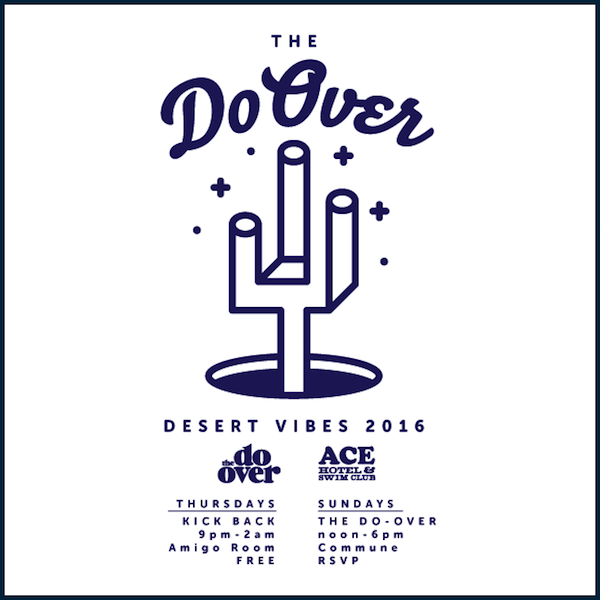 Who: Open to guests of the ACE Hotel and those that RSVP here.

What: A Coachella pre-party on Thursday, and pool party on Sunday. Lineup to be announced, but expect great music. 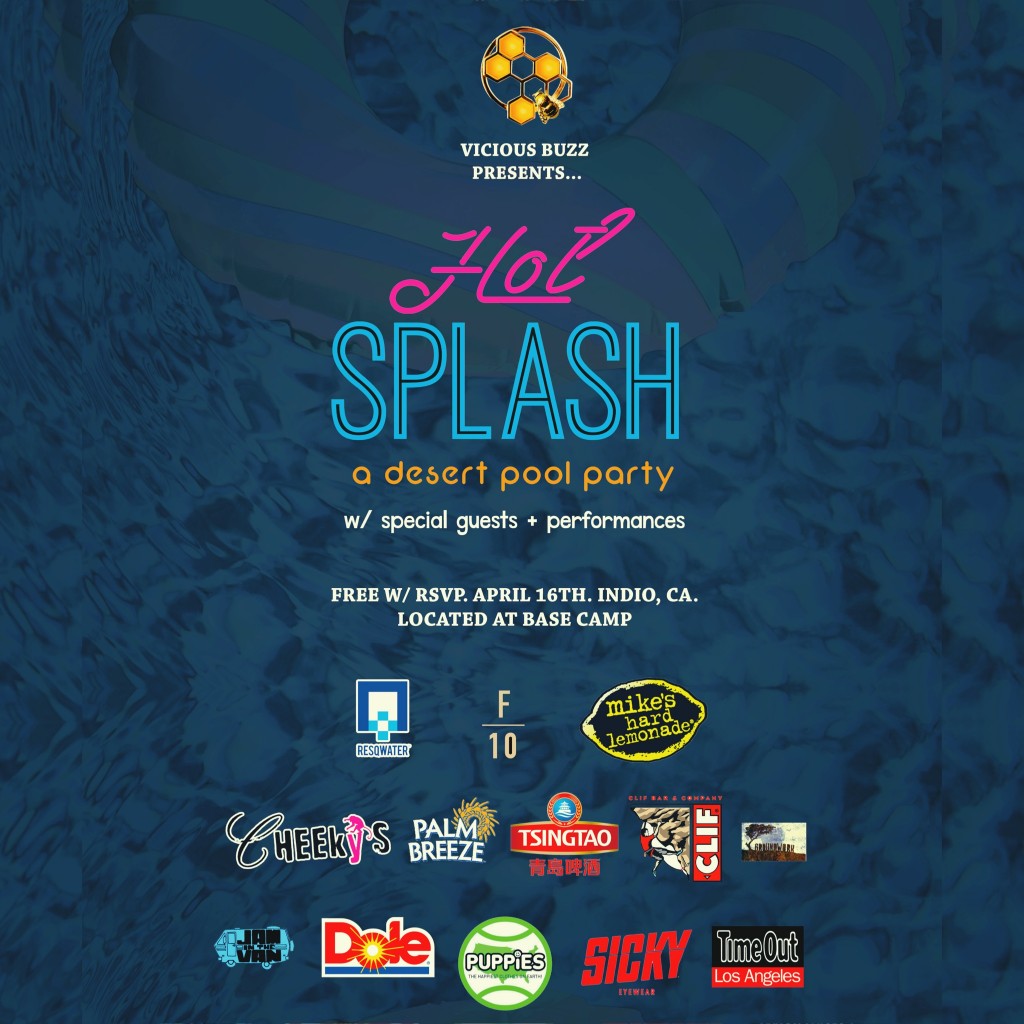 What: A Coachella pool party near a lake with Hot Air balloon rides, welcome to HOT SPLASH. With already over 4,000 people on the RSVP list, HOT SPLASH is destined to be one of the top pool parties and events at Coachella on at Base Camp – VICE’s Thump labeled Base Camp as the top party destination for Coachella, with praise from L.A. Weekly, YourEDM, and various online blogs. With food trucks and vendor sponsors from Red Bull and Mike’s Hard Lemonade, Vicious Buzz will be hosting and curating HOT SPLASH as a free-RSVP pool party. Located at Base Camp, HOT SPLASH has a pool & lake, curated DJ sets, cocktail bar, and hot air balloon rides. Did we mention Hot Air balloon rides? (yup, it’s going to be that type of party).

Where: Base Camp (see above) 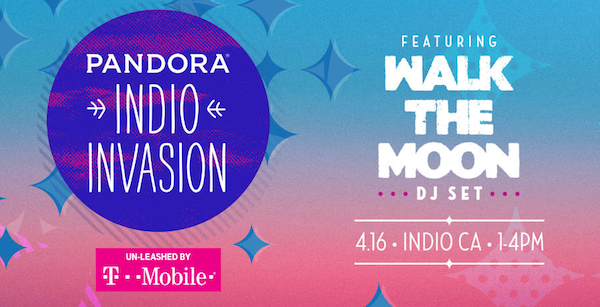 What: Clear your calendar – It’s going down! Pandora’s Coachella party is coming back to the desert for the third installment of our Indio Invasion. Join us for an afternoon of fun in the sun. Take a dip in the pool, savour some tasty treats and jam out with a special DJ set from Walk The Moon! 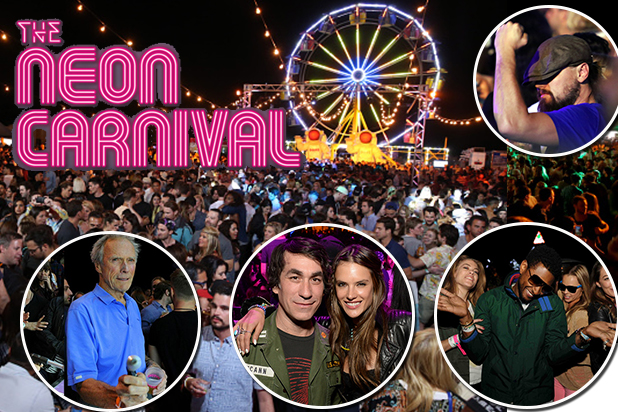 Who: Industry execs and celebrities (Bieber, Chris Brown, Usher, Leo etc.) . This is one of the most exclusive events in California throughout the entire year.

What: A celebrity-filled, Hollywood type after party that has made a name for itself as the must-do Coachella after party. The event is the product of Brent Bolthouse, Hollywood nightclub promoter and owner of The Bungalow in Santa Monica. “2016 attendees can expect new rides, a new setup, as well as DJs Kayper, Politik, Jesse Marco, and the under-appreciated DJ Ruckus, all of which will keep a predominantly industry crowd dancing late in to the night — or early into the morning, depending on how you look at it.” Read more here 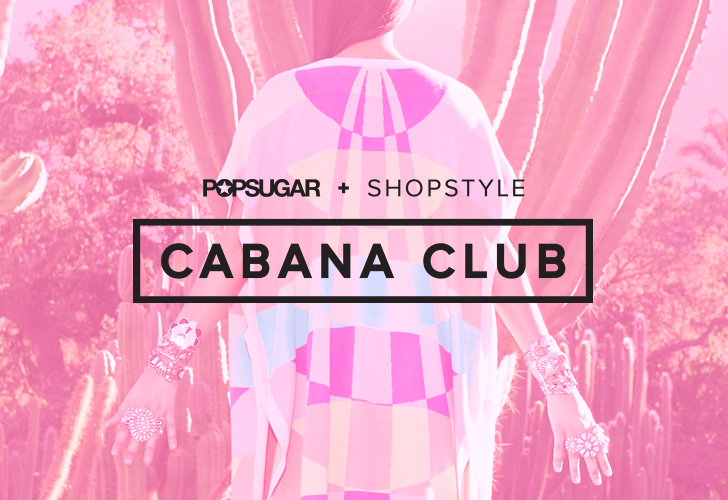 Who: Invite Only, or you can try showing up and making your way in.

What: Popsugar and the CFDA are hosting a brunch in honor of CFDA/Vogue Fashion Fund Winner Jonathan Simkhai. Also marking the return of the CFDA Popular “Must Have” box, the event will feature Brooklyn-based string duo Chargaux. 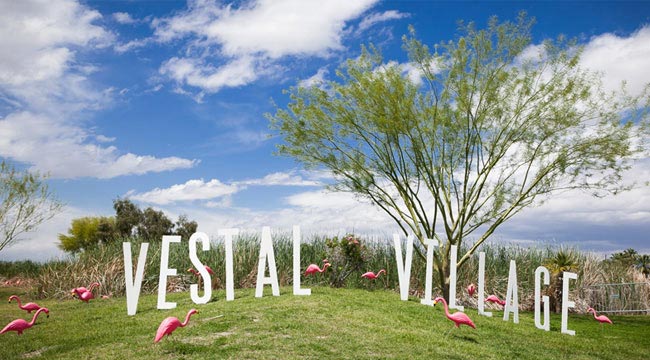 Who: Usually a Southern California + Australia type crowd that includes pro surfers an skateboarders. It’s a private, invite only type of thing, but more info can be found here.