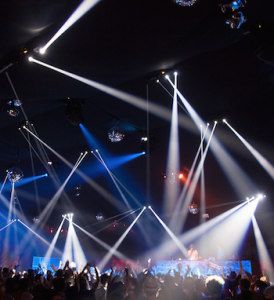 The Yuma Tent–which hosts both rising stars and the biggest names in “underground” dance music–was one of the most welcomed upgrades at Coachella last year, and is a sanctuary for those looking to escape the mainstream EDM and kandy kids found in the Sahara Tent. KCRW’s Jason Bentley and LA’s Sound Nightclub curated the lineup and designed the tent: air conditioning,  hardwood floors, couches and disco lights.

But fans that tried to catch sets by Jamie Jones, Maya Jane Coles, Seth Troxler, Richie Hawtin, or any set during the mid-day heat, were greeted by a 30-45 minute queue leading into the Yuma Tent. Things are going to change for the Tent’s second rendition.

According to a source close to Goldenvoice, the Yuma Tent will double in size this year to accommodate the growing popularity of deep house and underground dance music. The same source also told us the Yuma Tent will feature a beer garden, which seems logical considering the Heineken Dome will not be at Coachella this year. Deep house, air conditioning, beer garden? Sounds great!

The Gist: Daley Padley has been drawing crowds to see his sets since the age of 17, when he started a residency in his hometown of Leeds. His success landed him a residency at Cream in Ibiza at the age of 24, and has since made a splash releasing “Knee Deep Louise” and “Hurt You” on the Moda Black label, and “Hot Jamz Vol. 1” and “House Thiz” on Noir.

The Gist: American-born Eric Estornel (now based Barcelona, Spain) has been releasing his newest, and funkiest, content under his Ellum label.

The Gist: Solomun’s popularity has been confirmed by his numerous appearances in music industry readers’ polls. Starting in 2012, he started becoming known on the international stage of much-talked-about residencies at Sankeys in Ibiza. Solomun currently runs two labels: Diynamic and 2DIY4

The Gist: Although she was initially inspired by Chicago House and classic Detroit Techno, Nina Kraviz doesn’t stick to one or two genres. As a singer, producer and DJ, she dips into pop, techno, ambient and house.

The Gist: Dixon refined his technical skills by climbing the ranks in Berlin’s underground scene in the 90s.