It’s called the “Coachella Blues“, that desolate and melancholy feeling you get the Monday after Coachella weekend.  It may be caused by the depleted levels of serotonin and dopamine in your brain.

It may be caused from the sudden change of environment: last weekend you were at the world’s greatest music festival with 90,000 of your friends, and now you’re reading this from the chair in your cubicle, bedroom or university library.

You may be feeling sad because everything else seems boring compared to a weekend at Coachella.  But perhaps the real source of your sadness is the realization that you have to wait an entire year to experience Coachella all over again (unless you can afford to go both weekends, in which case I envy you).

Abstinence, avoiding the festival in the first place, is the only sure-fire way to avert  the Coachella blues (yeah right).  Okay let’s try this again.  The best way for treating your Coachella blues is to relive the festival: talk about your weekend with friends, watch your favorite performances on Youtube, share your Coachella photo album with your family, or recount your favorite moments of the weekend by writing them down in a journal.

Coachella 2013 was one of my favorite years, this was my experience:

I left Santa Barbara at noon Thursday with my girlfriend and her two roommates. The four hour drive to Indio was ritualistically jovial. We laughed non-stop as we reminisced and told stories about previous Coachella experiences. All the while, songs by our favorite Coachella 2013 bands played through the car speakers. Things got really exciting when the first windmills were spotted; we knew we were almost there. [PIC]

We met the rest of our group at the Home Depot in Indio and last minute supplies were purchased for our Coachella shade structure. Then our group (11 cars, or about 25 people) drove to the car camping entrance at 52nd street and Madison.

But just as our group was about to pull into the (very long) car camping line, my friend Matt’s 1990 Volkswagon Vanagon broke down and was forced to pull onto the side of the road. It was like a scene from out of a movie: the Vanagon had chugged along all the way from Los Angeles, 150 miles to the west, but decided to break down a mere 20 feet from its final destination.

Luckily, a well-prepared member of our group had brought a tow-line, and so the Vanagon was towed into the campgrounds by my friend Tommy’s Ford Expedition. 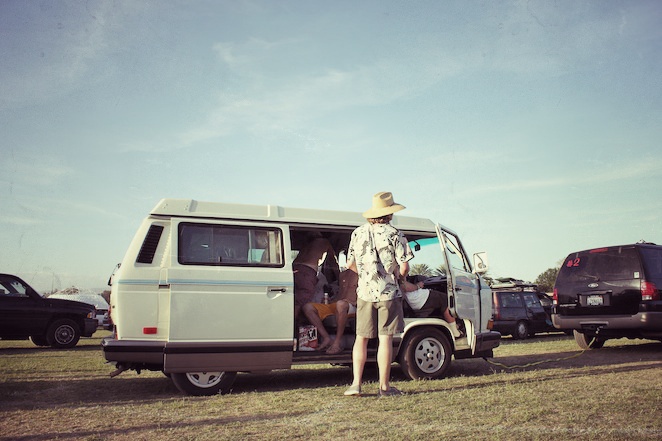 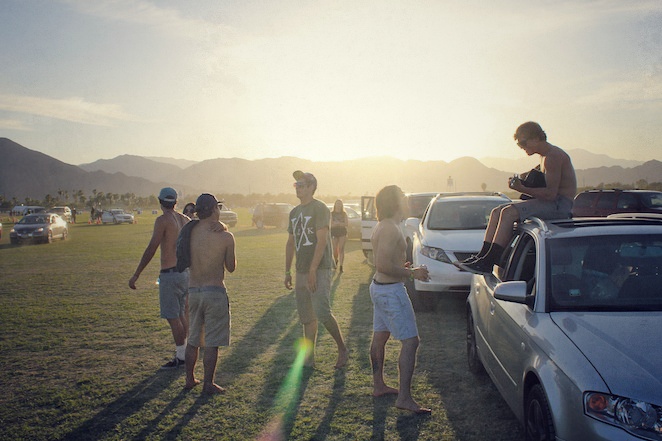 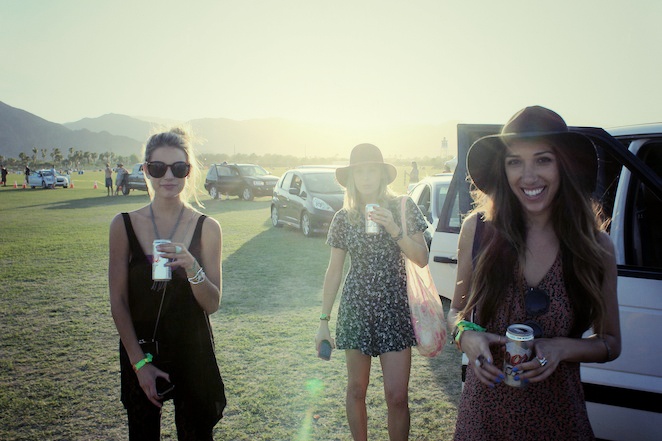 In the line for security we joined the rest of the festival goers by drinking beers and blasting music through our car speakers. By now it was getting dark, and we made it through the security checkpoint at around 6:00pm. We finally got to our camping site on North 156th street in Lot 4 and raced to setup camp before the sun set behind the Santa Rosa Mountains. By 9:00 we were all drunk, so we wandered the campgrounds until looking for parties. 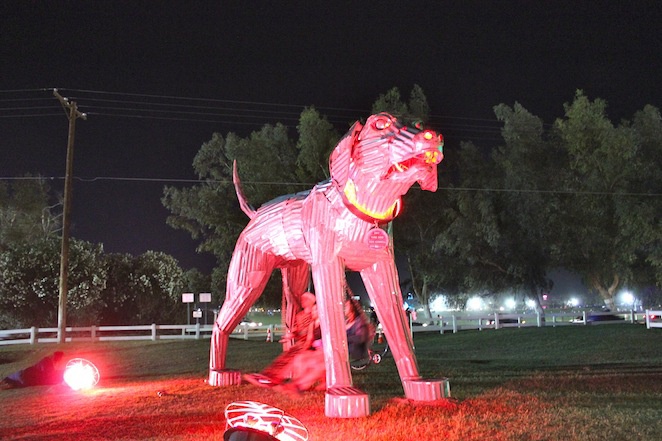 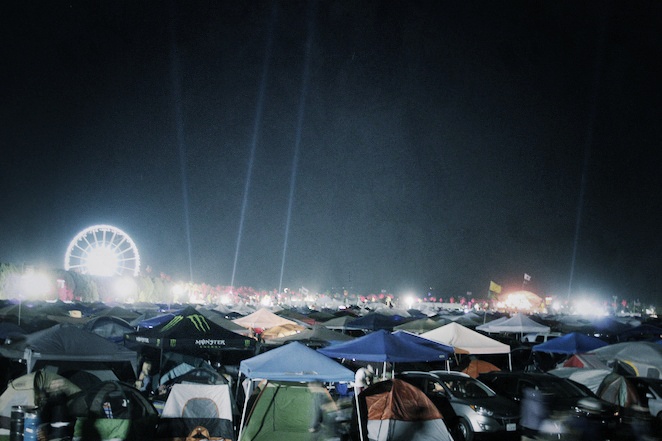 My girlfriend, Brynne, and I eventually made our way to La Quinta Resort to meet up with my friend Giovanna, whom I have known since high school. La Quinta resort is only a 10 minute drive from the Empire Polo Grounds, and we decided to stay the night there and return to the campsites in the morning.

Highlights: Setting up camp and raging in the campgrounds.
Lowlights: The Vanagon breaking down.

The lines on the first day are always ridiculously long. I waited in line for 45 minutes all to be turned back by security because I was attempting to bring in a “professional camera” (Canon Digital Rebel T2i). Not wanting to walk 20 minutes back to Lot 4, I jumped into another line and luckily made it past security my telling them, “hey man, this isn’t a professional camera. I’m not a professional photographer, if I were, then I would have a press pass.” It worked. 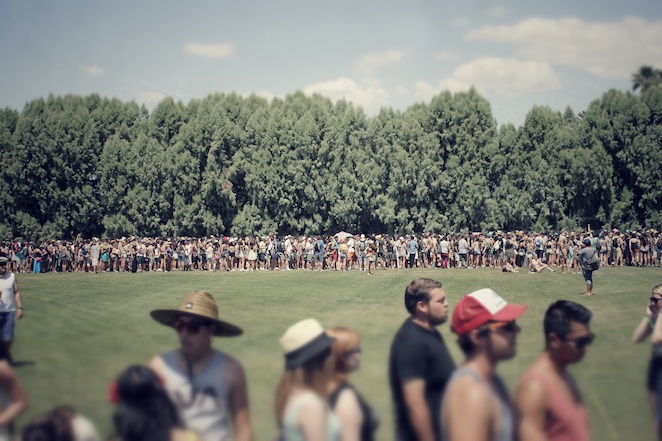 Friday had the best lineup and the best weather… Palma Violets, Youth Lagoon, Jamie xx, Purity Ring, Alt-J, Four Tet, Of Monsters and Men, Local Natives, Beach House and Passion Pit. But it was the Yeah Yeah Yeahs that stole the show that night (and for the entire weekend). I can’t wait to see them headline Coachella in a few years from now.

The night ended in the campgrounds, and as all of my friends headed to the silent disco, I opted to go back to La Quinta to get some rest for the next day.

Highlights: The first day of Coachella! Discovering and dancing in the new Yuma Tent. The new Sahara Tent.  Finally getting to see Of Monsters and Men.
Lowlights: The long lines for the Yuma Tent. The lack of a solid headliner (sorry Stones Roses fans, I think Coachella could have done better).

Saturday is always my favorite day of Coachella.  Friday’s are great, but all of my friends want to stay in one large single group, so I end up missing a lot of the bands on my must-see list.  And Sunday is always the worst day because the thought of Coachella ending looms in the back of your mind throughout the day.  Needless to say, I was excited to get Saturday started.

Woke up on Saturday and got breakfast in the plaza at La Quinta with my girlfriend and her roommates before heading over to the Plunge pool party.  The pool party was fun and admission was free, but the drinks were $10 each.  We setup towels on the grass, drank margaritas and splashed around in the pool as the DJ played music from Saturday’s lineup.   Swimming in the pool was refreshing, but we decided to head over to Coachella to see our favorite bands.  (shout out to Me Undies for hooking our group up with free (and really comfortable) boxers!) 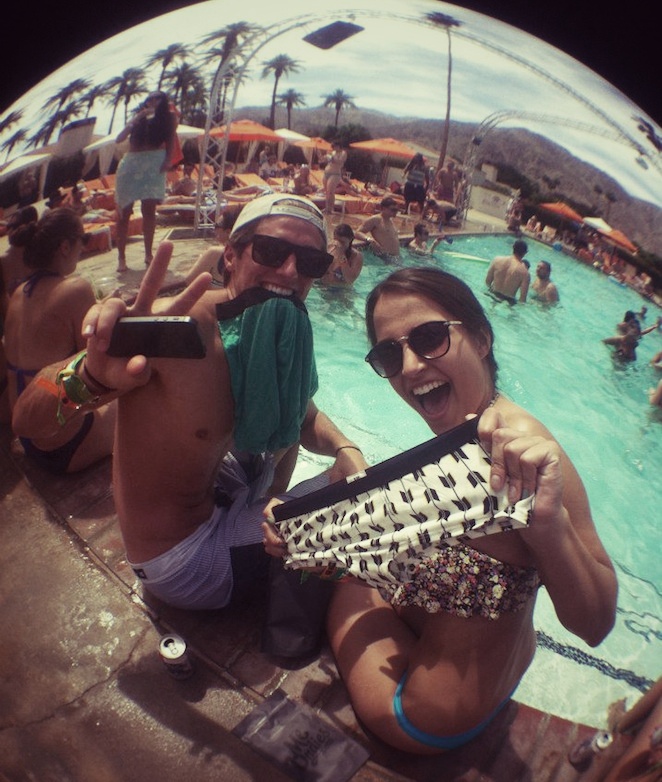 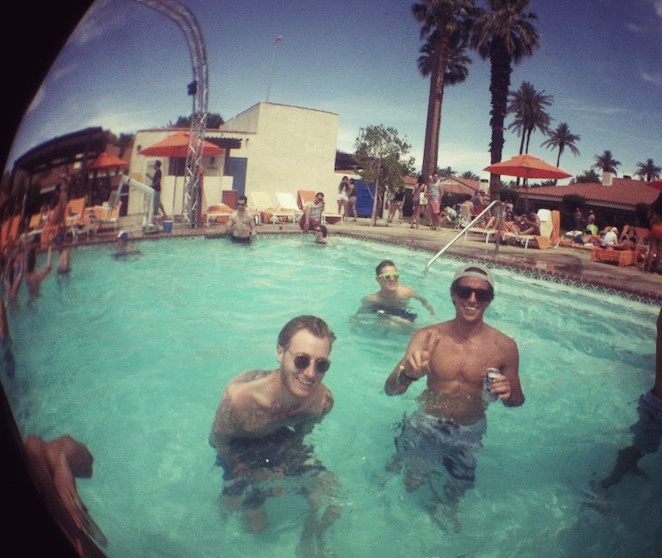 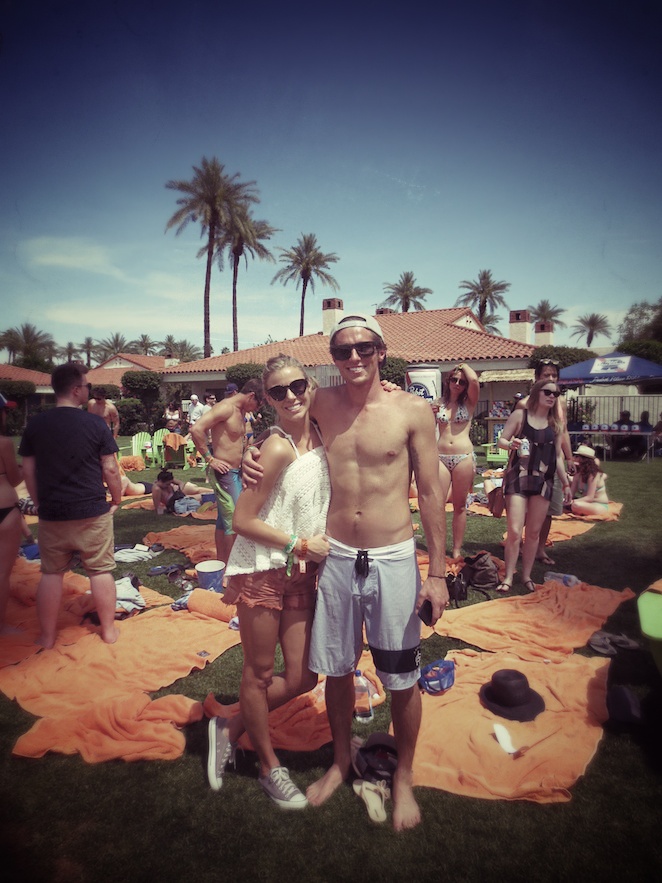 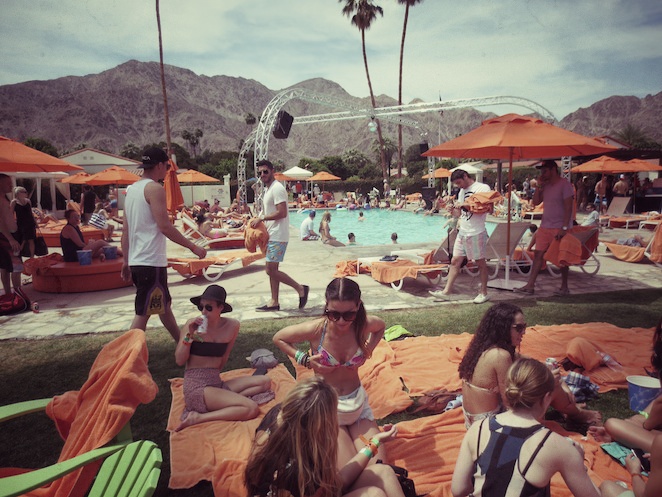 After arriving at Coachella, I headed over to the Yuma Tent to catch The 2 Bears, a side project of Joe Goddard from Hot Chip.  The Yuma Tent was an awesome addition to this year’s Festival.  My only complaint were the long lines to get in and the deep bass.  The bass was so loud that it was uncomfortable and drowned out the beats (thankfully I had my high fidelity musician’s ear plugs to protect my ears from any permanent hearing damage).  Around 6:30, I decided it was time to walk over to the Outdoor Theatre to see Portugal, The Man.

As I walked past the Heineken Dome, I noticed a young man seated on the grass, in handcuffs, surrounded by police in bright neon yellow vests.  A witness informed me that the kid was caught selling drugs to an undercover cop.  That just goes to show, never ever sell drugs to anyone!

I finally made my way to the Outdoor Theatre to see Portugal, The Man and finished off the night by seeing Hot Chop → Yeasayer → The Postal Service → Moby → The XX → Booka Shade

Highlights: The pool party in the morning and seeing The Postal Service reunited!
Lowlights: Seeing someone being arrested.

Sunday is always a sad day, it’s the last day.

But I made the most of it and arrived at the festival early to see DIIV, JEFF The Brotherhood, Jamie xx, Mimosa, Grimes and The Lumineers.

By 5:00pm a strong wind had developed.  Most of the festival-goers rushed back to the campgrounds in search of warmer clothing.  By 7:00pm a full-on dust storm was ravaging the Empire Polo Fields, but my friends and I stayed to watch Australia’s Tame Impala followed by Pretty Lights. 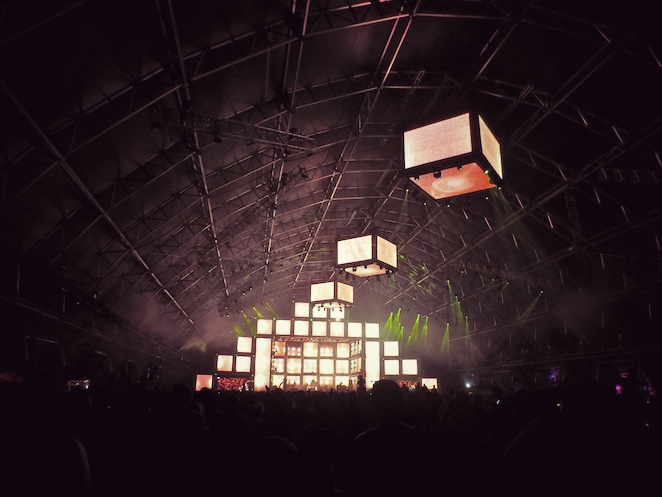 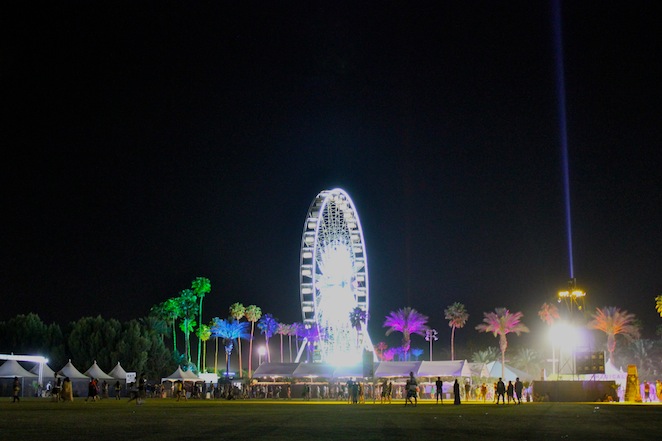 By the time the Red Hot Chili Peppers came on stage, the dust storm was blowing so hard that RHCP lead singer Anthony Kiedis remarked, “I feel like im in Lawrence of Arabia.”

I was excited to see the RHCP all weekend, but I left their set unfulfilled.  Maybe it was the dust storm, maybe it was their lack of enthusiasm.  Either way, I was pretty disappointed with the Sunday headliner.  I guess it’s tough to follow Dr. Dre’s and Snoop Dog’s Sunday closing performance which included a Tupac Hologram.

Coachella 2013 was a great year, despite Sunday’s dust storm.  That’s two years in a row of less-than-perfect weather for Coachella Weekend 1… will Weekend 1 be known as the “bad weather” weekend?

Update: I went to Coachella Weekend 2 also, but to be honest, I’m too tired to write about it!  What I will say is this: less crowds, less hipsters, better weather!

Until next year Coachella!